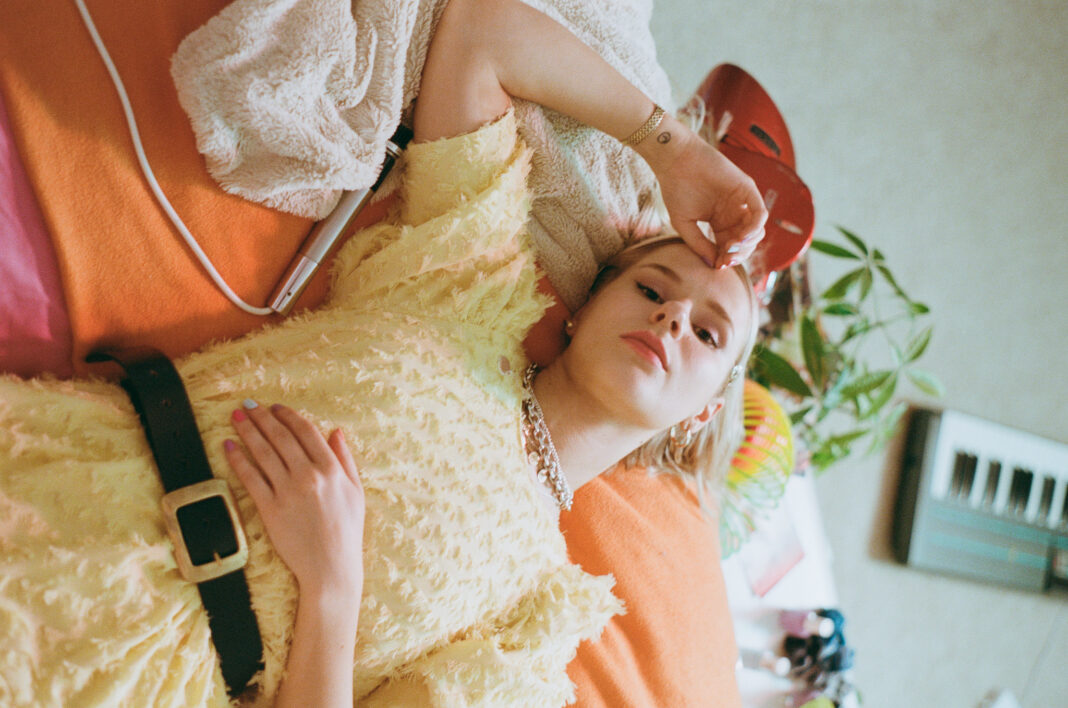 Skewering the perks and pitfalls of logged-in modern life atop bright, crispy production, ELIO is the brand new pop star we need right now. Already name-checked by Troye Sivan (who bigged up ‘My Friends Online’ on his burner account), Charlotte Grace Victoria – who was born in Wales, but grew up in Canada – also counts Charli XCX as a manager-stroke-creative-sounding-board.

And it’s easy to understand the high-level hype  – ‘My Friends Online’ is one of the stand-out pop debuts so far this year, melding glitching screens and lonely months spent miles from home with uplifting, glossy pop.

Have you got any new lockdown hobbies?

Well at the beginning of lockdown we shot the music video for ‘My Friends Online’ in my room, so I spray-painted my walls and everything. And so for about two weeks after that, I’ve just been taping things off and interior decorating to make it look normal again…

Where are you at the moment?

Usually I’m kind of back and forth between LA and Toronto, though obviously not right now. I’m locked down in Toronto. I love LA, especially in winter when it’s freezing cold and snow storming in Canada. I spent two months there just before quarantine, and avoided the Canadian winter. I’m always busy in sessions when I go. Last time I got to explore a little more, but most times I just see the inside of a studio.

It’s a strange place. Glossy and seedy at the same time…

Yeah! It’s so seedy, and then another part of town will be unbelievably rich and famous.

What is the song ‘LA in Two’ about?

Well, I actually wrote that one in New York. It’s about being in LA, and being attached to your phone because you have nobody physically there to talk to. It’s about when I was starting out this whole solo pop music thing; I wanted to move to LA, but I was scared to put myself out there – because obviously if I fail, I look stupid! For a while it was really lonely because all my friends are here in Toronto.

Were you always into music, even as a kid?

Yeah, I was always into it – but I didn’t have particularly cool taste. I really loved Avril Lavinge, McFly, Busted, and from there I progressed to Green Day and other pop-punk stuff. In high school I did a 180 and only really listened to ambient, shoegaze music – George Harrison and weird stuff like that. I got back into pop just after high school: The 1975, and went from there. Now I’m addicted to pop music, and I don’t know when it’ll end.

One of the best things about pop music, for me, is the way that it can often talk about dark subject matter – but within the context of a really uplifting melody. What draws you to it?

There’s definitely different facets to pop music – there’s really vapid pop, which can be great in its own right, but I think the pop music that I really love is the stuff that has amazing melodies, the production is unbelievable, but the songwriting is the best part – the lyrics are meaningful, and has a message. If you played it on an acoustic guitar it would still sound really good. A message and lyrics that mean a lot, but with banging melodies and production.

At what point did you start playing music?

I had a band in high school, an alt-rock shoegaze band. I was writing a lot for that, and before that I wrote songs but never seriously. My first band played indie-rock songs… I played in it until I went to University. Then I decided to write pop music!

Was the band you were in called GREY // WATER?

Oh my god. Yes! How did you know that? I think writing that kind of music first of all helped me in terms of making music that is a little off brand – ‘My Friends Online’ has no pop structure, and just one chorus that lasts for not-that-long. Starting off writing music like that has been a help in terms of broadening the pop structure. We used to play so many shows, like, three a week. I haven’t played live as ELIO yet, but I think that will start showing once I start playing my own shows.

Has your ELIO moniker got anything to do with Call Me By Your Name?

I’m obsessed. I spent about two months in Italy one summer, and it was the best time ever – such a coming-of-age moment, and I’m not even kidding. I was in Siena, and travelled around a bit to Venice and Rome. When I got back I watched Call Me By Your Name and it made me so sad – I was back in cold Canada, I wasn’t eating gelato twice a day… y’know? It was a real reality check. I didn’t think about the moniker too much, and I didn’t want to think about it too much.

Luca Guadagnino, who directed the film, has said that he reckons Elio would be a bedroom producer if the story was set in the present day – which seems quite fitting. Did you decide to film your video for ‘My Friends Online’ in your room as a tribute to where you started making music?

It’s a bit of a nod back to writing stuff in my room, and where it all started, yeah. Me and my friends like to make silly iPhone videos all the time, and I thought it’d be nice as opposed to doing something in LA, or this huge production thing. I thought it’d be cool to have it in my house, hang, and write stuff all over my walls for this stupid video.

Technology is a massive theme on your EP – particularly on ‘My Friends Online’ and ‘Body Language’. We’ve basically been online our entire lives. Do you think that’s a good or bad thing?

It’s a two way street. Both of those songs touch on that idea. It’s great to be able to stay in touch with people when you’re all the way across the world, and even have a relationship with someone you’ve never met. I think that’s amazing. But as a result, a lot of people do have their heads down, on their phones. In terms of me being away and speaking to friends who are here, I feel like it can be limiting. It’s very comforting at the time for sure, but I probably could’ve made more friends in person. ‘Body Language’ is mostly about my relationship. My boyfriend is a musician, so he’s on tour a lot. Learning when your phone is serving you, and when you’re serving your phone is a massive thing for our generation.

Does it feel strange to be releasing an EP that tackles these kinds of subjects, while we’re all especially dependent on technology to keep in touch?

It’s crazy. They announced the lockdown, and I thought: is this a little close to home? But I’m glad I’m releasing it. I feel like it’s taken on a whole other context. One that I never would’ve thought it would take on!

Charli XCX has been a big champion of your music…

Yeah, she’s taken on a manager role, actually! I met Charli in September, she’s really sick. When I was in LA I was staying at her house and we would sit down and listen through demos and talk about what to change, what is working, where things should go. We shoot ideas with each other. Not a lot of people have that in a manager, where they’ve had their success and are naturally very artistic and creative.

When I think about artists who have really disrupted the conventions of pop, I immediately think of Charli: she really ran with the idea of putting out mixtapes instead of following album cycles, and she’s been working on a quarantine record, too. It must be great to have a person like that as a sounding board – especially given what you said about wanting to disrupt the structures of pop yourself…

For sure. A lot of my songs are generically pop, and some of them are not. Somebody with an open mind is great. She never lets me settle for just a good pop song. It makes me want to do cooler things and broaden the horizons because I know I’m supported. She’d have my back.

How do you hope your music will make people feel?

I hope they really connect with the songs and take in the different parts – there’s a lot of different dynamics. There’s Rn’B songs, indie-pop songs, pop, a lot of stuff happening – and at the base of it, hopefully genuine songwriting.