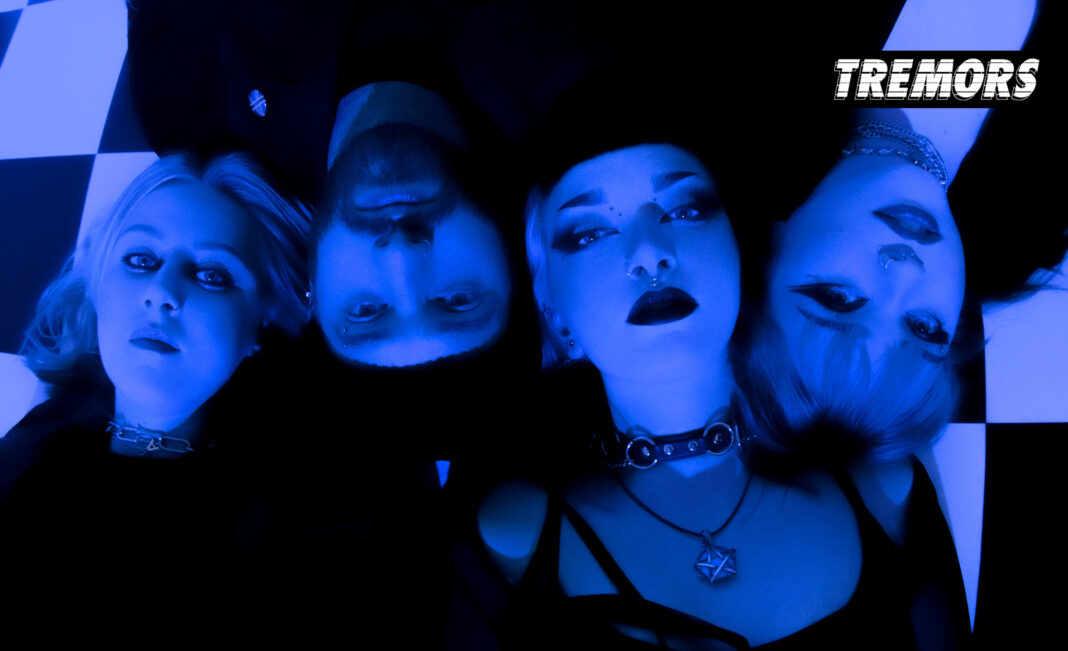 “As a band, we’re constantly trying to strive [to create] a safe space,” Crawlers’ singer Holly Minto says firmly. That’s an attitude that’s key to everything the Merseyside band does – from their live shows to their compassionate, captivating rock songs – and why they’re quickly becoming the new band to believe in right now.

Although they’re still relative newcomers – Minto co-founded the group with guitarist Amy Woodall and bassist Liv Kettle in late 2018, cementing their line-up with drummer Harry Breen in 2021 – they’ve swiftly scored a legion of loyal fans thanks to their commitment to tackling the issues affecting themselves and their peers in their music. Whether they’re singing about social justice on 2021’s blisteringly urgent ‘Statues’ or the sexualisation of female-presenting people on the dark stomp of ‘Monroe’, they don’t claim to have all the answers but invite you to join them on their journey to figuring it – and themselves – out.

‘Fuck Me (I Didn’t Know How To Say)’, their electrifying and important new single, is no different. Over searing rock riffs, it broaches the sensitive but perennially timely subject of consent and sexual assault in a way that makes you look at the topic from a new angle and makes your own experiences feel seen. “You deserve better so I gave you my body,” Minto whispers on the track, later adding: “The kisses that led to sex were close enough.”

“I remember hearing that Leith Ross song [‘We’ll Never Have Sex’] and the lyrics “You kissed me just to kiss me,” she explains from her home in Liverpool. “I heard that and realised that, at that point in my life, I felt like I hadn’t been kissed to be kissed. I felt like I’d always been expecting more.” Like all Crawlers songs, it comes from an incredibly personal place and describes feeling like you’re “not worth anything but sex” and that you “owe something to other people, or owe a body just so you can feel love of some sort”.

The song’s chorus tackles not knowing how to tell a sexual partner what you want – or don’t want – and the pressure that can come from intimate situations. “I said it was fine in your defence,” Minto acknowledges. “But I didn’t know how to say I don’t want you to touch me.” They’re lyrics that highlight some of the complexities of consent and the fact that it’s not always black and white.

With such a nuanced issue, it can be hard to know how to improve education and awareness around it, but she suggests consent being taught in schools “not just in a sexual way” as a step in the right direction. “‘No means no’ applies in every kind of circumstance and respecting your boundaries from a young age is what it’s about,” she explains. “Teaching that and what that means from a young age is so important. It’s still very hard to teach those things because there are such blurred lines, but I’m hoping that as we grow, that becomes more of a considered thing.”

‘Fuck Me’ will not only spark conversation around that topic but will also raise awareness for charities working in that area. The band are partnering with Brook, an organisation that offers sexual health, education and wellbeing services to young people across the UK, and will be fundraising for them via merch and other avenues. “Doing a single with such a hard topic, we’re gonna do it as sensitively as possible and make sure that now we have a label [Crawlers are signed to Polydor] and financial support, we do it in a way that’s safe for our listeners,” Minto says.

That move reflects how much thought the band have put into deciding to make a song centred around such a sensitive topic a single – something their frontperson notes is somewhat of a risk. Despite it coming with “a lot of emotional baggage” and the fact that singing it live can sometimes be a lot for them, going ahead with that decision tells you a lot about Crawlers’ refusal to shy away from the difficult issues as they continue on their mission.

“I’m really happy to hopefully give the subject a bit more of a platform,” the singer adds. “We’ve had people [who’ve seen us] live or seen the teasers say that the song is already resonating with them. It’s nice to give them a voice with that song and to prove to them that you’re not alone and you’re worth so much more than what you feel you need to give sometimes.”

It’s not just through their songs that Crawlers are building a safe space for their fans. Their live shows, too, are a place where everyone can be themselves and celebrate who they are. At a gig in Manchester earlier this year, the band invited a long-time fan called Connor, who is deaf, to do a signed version of their viral, emotional 2021 single ‘Come Over Again’. “I think a lot of people forget the deaf community can appreciate music and can be involved,” Minto says. “It’s such an underrepresented community in music. Connor has been such an incredible supporter of us – being able to organise that was wonderful and seeing our words in another language was just stunning. Definitely a lifelong memory for us.”

In the near future, Crawlers will be making yet more memories to treasure for years to come. Next week (May 27), they’ll play support to My Chemical Romance in Warrington, Woodall and Kettle’s hometown. “Crying, shitting, throwing up!” Minto replies excitedly when asked what the opportunity means to them. “I’ve always been an emo kid at heart. In high school, MCR were my comfort band so it’s just crazy. The vibes are gonna be immaculate and to play to a crowd of people that I know that I would be in is a dream come true.”

After that, the four-piece will head Stateside for the first time for a headline tour and festival dates. Two EPs and a handful of singles in, it feels incredibly early in their journey to be embarking on such an adventure, but the fact that they are is just a testament to how far-reaching their impact is already. “We’re fortunate that even on our first release [2019’s trumpet-laced single ‘So Tired’] we had loads of people in America streaming our music,” their singer says. “Being able to go there and see all the fans who’ve been supporting us since the beginning is gonna be crazy.”

Beyond that, Crawlers will be spending 2022 sharing yet more inventive and inspiring music with the world. Where ‘Fuck Me’ takes influence from hip-hop beats, their upcoming tracks delve even deeper into their “no rules” approach to mixing genres. “We’ve got a pop song in drop C tuning, very pulled back acoustic songs with trumpet swells [in the vein of] Neutral Milk Hotel,” Minto lists off. “We’ve also been playing around with influences like The Cure, Bauhaus and Fleetwood Mac, which we’ve not really explored before. It’s nice to not feel boxed in – it’s gonna confuse some listeners but we’re actually making what we like and that’s a great place to be.”

That assessment of their position right now feels largely applicable to the world in general as the band continue their ascent. Life might be a struggle with countless trials to get through but, with Crawlers around to help us all on the way, it’s an infinitely better journey to be on.

READ MORE: Every My Chemical Romance song ranked in order of greatness