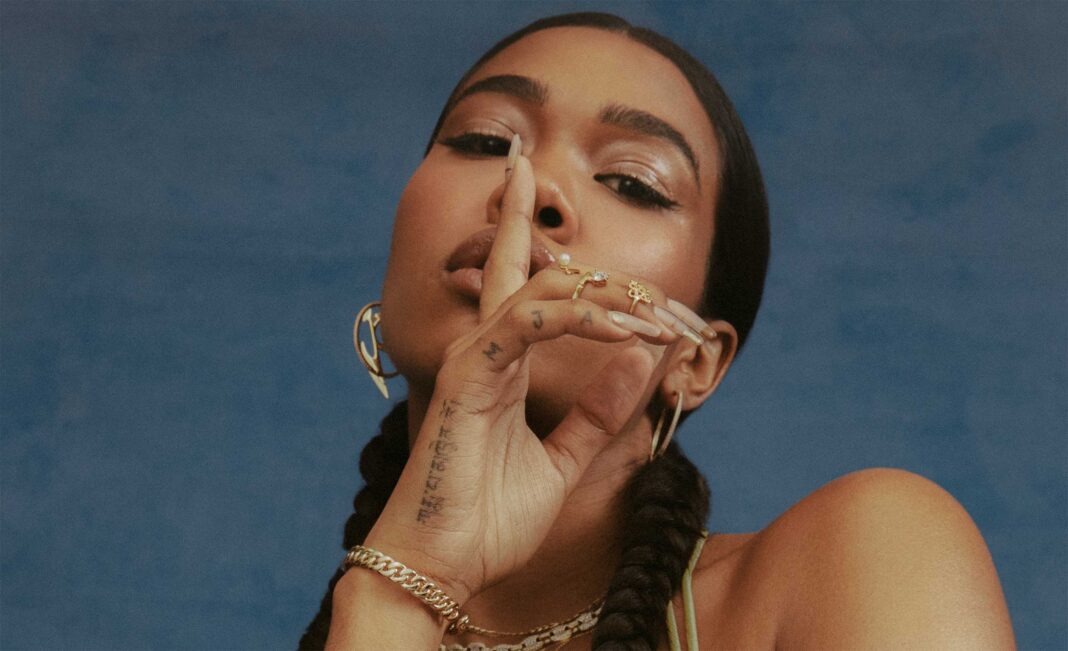 Amber Mark has been busy searching for the meaning of life. The past two years have been all about self-exploration and discovery for the singer-songwriter and producer, kick-started by a bout of imposter syndrome rearing its ugly head in 2019. At the time, Mark was questioning her abilities, despite the many successes she had already found with her soulful, pop-R&B sound by her mid-20s. It was a feeling she couldn’t shake, but one that ultimately catalysed the next stage of her musical journey, starting with the lush statement of intent ‘Worth It’.

“Lyrically, I think I wrote it to kind of motivate myself,” Mark explains of the 2021 single, “to start off with something that had a really strong message. It’s one of my personal favourites, I hold it so close to my heart and it really touches on a lot of insecurities that I have. It’s my ‘Eye Of The Tiger’ – like my own little personal anthem.”

“Easier said than done / Trying to be the one / It’s so hard to not be hard on yourself,” the track begins, speaking on something that many will be acutely familiar with. But as the chorus glides in, its message of empowerment is conspicuous: “You think you don’t deserve it / But you are so damn worth it, baby.”

It’s hard to imagine someone as fiercely talented as Mark doubting herself in any capacity but we all know that such feelings can arise even at the most unexpected of times. It was a songwriting session in California in 2019 steered by her friend and producer Julian Bunetta that initially allowed her to release these feelings, which in turn led to the beginnings of her debut album ‘Three Dimensions Deep’.

“There are definitely moments of stress but with some of the songs, it’s like I’m feeling this, and I just need to get it out of my system so I’m going to write a song about it. I think it was helpful working on this album with Julian Bunetta, who was like my music sensei, and kind of just my life sensei too. Working with him and having him confirm certain things about my abilities was very helpful for me for my own inner-sanity and inner-questioning as well.”

We’re speaking over Zoom just a few days before the release of ‘Three Dimensions Deep’ and though visibly relaxed and at peace in her home in New York, Mark is not afraid to speak about the negative effects of that period of uncertainty. This is perhaps best exhibited in her explanation of why the album is split into three segments – Part 1: ‘WITHOUT’, Part 2: ‘WITHHELD’, and Part 3: ‘WITHIN’ – moving from this initial notion of insecurity to confidence and then an understanding of her place in this world.

“Initially, I split it up into three parts, mainly just for myself to understand where I was going and what went where, because a lot of songs were written at different times.” She says of the album’s structure. “Then it became part of the story and how I would describe it. So having those three parts really allowed me to process my feelings and what I was going through and then it also allowed me to turn it into a story and take people on a journey.”

She adds that the three parts or experiences are not essential for the listener to know about in order to enjoy the album but rather, can be seen as “Easter eggs” that provide a little extra context. The most important element is the connection that listeners can make to the journey itself and Mark’s wider questions about life and the universe.

“I didn’t know where I was going to go with the album conceptually when I began the process of writing it, it kind of just happened naturally with time. The album touches on so many things and I think that I really wanted to talk about all these different inner insecurities and turmoil that us human beings go through throughout life. So I wanted to connect to people on that level. Then I expanded on that and took this turn in trying to discover the universe within. I’m really such a sci-fi nerd so I tried to implement all of these different theories that are out there within the physics world, and then also just in sci-fi movies that I love and TV shows that I love, also connecting spirituality to it.”

The pandemic certainly brought fragments of this spirituality out, as the quiet of lockdown gave Mark the time and space needed to think more deeply about the big questions she was already considering. But it wasn’t as if this didn’t already exist for her; it was just something that found a new home as the world stopped temporarily around her.

“I think that I felt very deeply connected to my spirituality when I was younger,” Mark says, “Then as I grew into my teen years, I pushed it away, because my mom was very spiritual. She was a Tibetan Buddhist and she really tried to bring me up that way. But I think that as a teenager, you don’t want to do anything your mom’s doing; it’s not cool, which is stupid. I pushed it away and then when my mom passed away, I really saw God and the afterlife as a coping mechanism to really counteract the fear of death and the fear of losing someone.”

Despite having distanced herself from spirituality, it was the combination of having time over the pandemic and Mark’s interest in science and the universe that strangely brought her back. “Last year, I really started to feel way more spiritual, just by learning about these different theories that are out there. It was actually science that made me feel more spiritual, which is pretty crazy. It made me feel more connected to our planet and to my mom. And so it kind of brought that out in me.”

Mark’s favourite song on the album ‘What It Is’ is also the lead single, perfectly exemplifying this idea of grappling with your purpose in life. The song was written in February 2021 and in many ways, it lyrically encapsulates the album’s concept and everything that Mark was contemplating during this period of downtime. It’s a soaring, ethereal number with gorgeously layered harmonies over a funky bass line that sees her reflecting with questions like “What is the point of it all?”. As it was written last year, it also highlights the direction that the album ended up taking, with Mark also admitting that ‘Three Dimensions Deep’ would likely be a completely different album, had it not been for the break in proceedings.

“Even at that time, I didn’t really know what the album was,” she says of the period just before lockdown. “So I’m so thankful that we had time to pause and put the whole thing on hold and I was really able to dive deep into what I was trying to say, and what I was trying to write about. A lot of the songs were written; it was more about me trying to understand the story and ask what I was trying to say with the project. I think it really allowed me to figure that out and I’m very thankful for it.”

Listening to ‘Three Dimensions Deep’ in its present iteration, it’s clear that it has benefited from the pause in many ways. It’s an album that is polished in sound and concept, but also one that showcases exceptional songwriting from an artist that is open about building herself back up and trying to find her spot in the cosmos. Mark agrees that there is a big jump from her 2017 EP ‘3:33am’ and ‘Three Dimensions Deep’, though there are connections between both.

“I feel like there are some songs on there that sonically have a similar vibe to ‘3:33am’. And I wanted to make sure that that was the case. But I feel like I’ve definitely grown musically, and in my capabilities in terms of production, writing and working with other musicians and writers. I listened to a lot of my demos from years ago, and just the quality of sound and how much I’ve learned about producing and making beats – it sounds very different.”

In the process of searching for the meaning of life, Mark has found something even better; unwavering faith in herself and her talent. But what she wants now more than anything is for the album to have an emotional impact on those engaging with it, giving them the tools to ask their own questions.

“I feel like we don’t really think about the fact that we’re floating on a muddy rock in the middle of the universe,” she laughs. “That’s not really what comes to mind on a daily basis. And it’s pretty weird that’s happening, and that the rarity of life exists and we’re experiencing it. So if possible, I’d also like to bring that sense of wonder to somebody’s mind.”