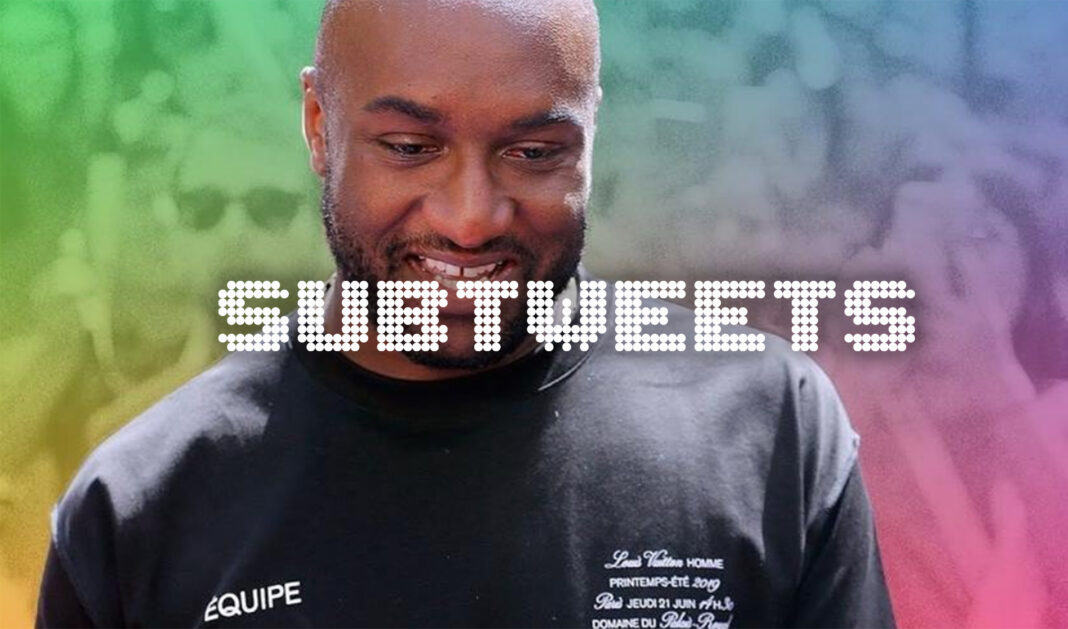 No death of someone in their prime is ever without its own deep sadness, but there was something about the news of Virgil Abloh’s death that stung as an inherent loss for the culture. Creator of the fashion house, Off-White, as well as artistic director of Louis Vuitton menswear, the designer underwent a two-year private battle with a rare form of cancer, before he passed away on November 28 2021 in his home state of Illinois, at the age of 41. The worlds of fashion, music, sport and culture have come together to mourn his legacy, marvelling at his ability to forge bonds in such a multi-dimensional way.

Though Abloh indisputably made his name in fashion, music was also a core vessel for his artistic communication. A true multi-hyphenate, he started DJing in his teens before discovering a passion for design, which he followed through degrees in civil engineering and architecture. Whilst interning for Fendi in 2009, he met fellow intern Kanye West, who hired him as creative director for DONDA design. Abloh’s work as an art director is hugely interwoven with the Kanye West brand – ‘808s and Heartbreak’, ‘Cruel Summer’, ‘My Beautiful Dark Twisted Fantasy’, ‘Yeezus’ – establishing a blueprint of playful provocativism and religious reimagining. In many ways, his popularity runs synonymous with the “backpack rap” label that opened the gates to a wave of artists who were pushing further with their lyrical intellect and widely-influenced sounds – Drake, Childish Gambino, J-Cole, Kid Cudi. In 2011, Abloh was awarded a Grammy for Best Recording Package on ‘Watch The Throne’, a project for which he also designed the now-iconic world tour staging. Where there was a medium, there was a creative vision.

Hip-hop has always had a long association with fashion and high-end material goods, but with Abloh, it was starting to realise that fashion could not only be a medium of street cred, but a mainstream communication tool. If an up-and-coming rapper was set to make waves, Abloh was there in the room early; Drake, Future, Big Sean, Young Thug, Lil Uzi Vert and Frank Ocean are just some of the artists who have credited his influence, friendship or the direct contribution of artwork as instrumental in the reputation and unique viewpoint of their work, allowing them to think bigger. As hip-hop has grown to become the world’s most dominant genre, the stature of the music influenced wider fashion too, an enthusiasm for street style hoodies, graphic tees, trainers, crossbody bags and loose tailoring as something inherently cooler than traditional formalwear.

For his 2018 debut show for Louis Vuitton, Abloh assembled a veritable who’s who young artists as models – Playboi Carti, Steve Lacy, Dev Hynes, Kid Cudi — with Rihanna and ‘Ye cheering him on the from the audience. The celebration of Black artistry was central to his vision. This was fashion for the internet age, where Black culture finally gets its long-overdue recognition, but where geographic boundaries are no longer an obstacle for the size of your dreams.

Even as his design star ascended, Abloh kept DJing. With friends (famous or otherwise) in attendance at his gigs, he would debut unreleased tracks from the industry’s heavy hitters, and plan meticulous mixes for his runways, releasing them on Soundcloud under the name Paris, IL. In 2017, he played several sets opening for Travis Scott’s shows at New York’s Terminal Five, and by 2018 he had dropped his first EP ‘ORVNGE’ in collaboration with German producer Boys Noize, a techno-alternative blend that seemed to perfectly capture the energy of a late-night Berlin show.

As with anybody operating on this creative level of prolificacy, there were some missteps. A 2019 collection inspired by Abloh’s muse Michael Jackson launched a week before the Sundance Film Festival release of Leaving Neverland (production of the items was swiftly pulled), and in 2020 during the George Floyd protests, he was mocked online for expressing concern over looted businesses, with many criticising him for losing touch with the culture. Nonetheless, he continued to demonstrate a keen commitment to the uplift of others; in March 2020, he launched the Off-White International Rap Studio, directing the music video for Quavo and the late Pop Smoke’s collaboration ‘Shake The Room’, and by May 2021, he had premiered his monthly ‘Imaginary Radio’ on London’s Worldwide FM, showcasing mixes and interviews with musicians and creatives. As we now know, he was diagnosed in 2019 with Cardiac Angiosarcoma, rendering his relentless achievements even more astonishing. Until the end, he remained committed to an ethos that seemed to drive his entire career; work hard, follow what you love, and when success beckons, bring others along with you.

Taken before he could complete what would have undoubtedly been a long and illustrious career, the work that Virgil Abloh has done to solder the links between hip-hop and wider culture will never be forgotten. The feat of creating such space for Black men to have fun with fashion – and to do it at the very top tier levels of simultaneous cultural and industry respect – is something of near-impossible proportions, an open gate to the generation that follow. In his time as a creative, the genre has grown beyond recognition; more ambitious, more artistic, a movement for articulating joy, struggle and big, unbridled imagination. Wherever hip-hop and wider culture goes next, it will be at least in part due to the path that Virgil Abloh has paved. May he rest in peace.