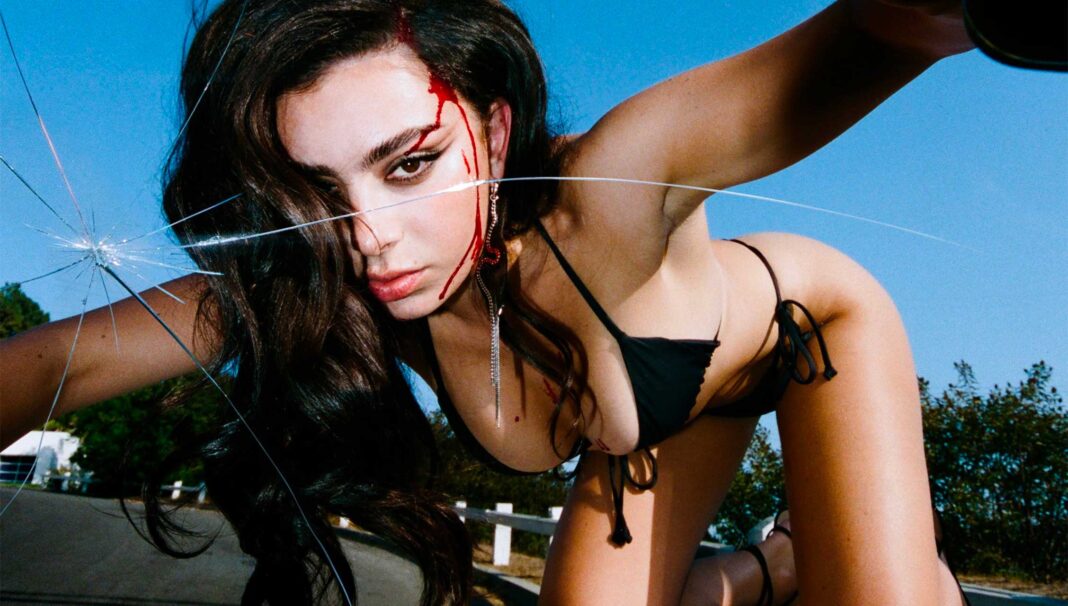 Charli XCX has always been a Stan girl. From the very beginning, she has placed her Angels front and centre, listening to their advice and doing what she can to be reflexive to their requests. An icon of obtainable proximity, she has been beloved for the last decade as a core inspirator of the hyperpop sound, shaping safe spaces for LGBTQIA+ positive fandom. Her community has long been known for its vocal honesty, but as she prepares to release ‘Crash’, her fifth studio album, fan dissent has gotten louder than ever before, scrutinising her for a more mainstream sound.

Amidst countless criticisms and shady tweets, last week XCX responded to one particular fan, defending the choices she was making artistically. A brief conversation ensued, in which the fan doubled down on her initial disappointment: “the only thing consistent about it is how underwhelming it is TBH, but yes still love u and ur music overall 😅💓”. As such, a huge scale debate has broken out amongst Angels; some calling the fan out for being rude, others praising her for daring to saying exactly what they were thinking. A deeper question of fan entitlement vs. social media honesty has broken out, questioning the space that fans have to discuss their fandoms.

Given the tone of laughter, it’s very easy to say that this kind of critique comes from a place of love. As XCX herself attests, it is totally fine to have a favourite era or album. It is often okay to use social media to talk with fellow fans about an album that doesn’t seem to be delivering on the particular things that you hoped it might. But when that record isn’t even out yet and you’re telling the artist directly how underwhelming it is, you’re perhaps not overstepping the relationship so much as inviting yourself into their studio, putting your feet up on the coffee table and demanding a snack. Given that Charli had already posted a month previously about stepping away from twitter for the sake of her mental health, the degree to which she has been continually bombarded with complaints, snarks and ‘no offence tho’ shade feels not very fannish at all, but rather a further sign of how commoditised our popstars have become in the streaming age.

When so much choice is available so cheaply at our fingertips, we now see ourselves as the true creators, ruthlessly curating entertainment to our specific gain. Opinions are all well and good, but when we can’t get exactly what we want immediately, we grow impatient, feeling as if we should have been served better. In previous generations, being a disgruntled fan might have meant changing the channel, maybe writing a frustrated letter to a fan magazine. Now, it seems to involve actively telling that person that they’re ‘mid’, openly mocking and guilt-tripping their attempts to create some level of artistic or personal boundary. We saw it with the recent responses to Mitski’s (very polite) request for fans to not video the entirety of her concerts, and in the way Lizzo left the platform in 2020, tired of the supposedly well-meaning trolls. We praise our favourite artists for letting us in and being relatable, but then can’t pay them back in kind when ask for some empathy of their own.

In recent weeks and months, Charli has released four music videos that she seems deeply proud of, stretching a new side to her creativity. She has been accused of selling out, of being a terrible dancer and of letting her audience down, all by people who otherwise profess to love her. The fans who have backed Charli as a hyper-pop ‘pots and pans’ underdog feel like she is theirs, and they want her to continue making future-thinking music that stays within its own cult interest bubble. While the new singles are distinctly credible hits (have you HEARD Beg For You?), they appear to be rubbing audiences up the wrong way by virtue of being the wrong kind of experimental, expressing a different kind of ambition. Her creative baby has been declared a fandom flop, before anybody has had the chance to hear it in full.

By responding and elevating the discussion, some Stans feel that XCX is making things worse. Lots of fans had been trash-talking, but by singling one out to reply to, it is claimed that she invited an unhealthy pile on, that she would have been better to keep yourself out of the discourse. There is fair observation in this; the fan didn’t originally tag Charli, and we all know that the perceived safety of an internet persona often encourages people to be bolder than they would in real life.

Twitter isn’t famous for its degree of nuance; Stan language evolves so fast that certain phrases get lost in translation. Calling someone ‘mother’ may be a clear sign of legendary respect in the LGBTQIA+ community, but to the less initiated, it might also appear to be a bit of an age-based diss. Charli does perhaps know better than to read through these messages, or to call her fans names without fully understanding the context of what they were getting at. But some personal responsibility still needs to be taken for the fans who chose to speak so openly, and some acknowledgement for how demoralising it must feel when even the people who profess to love you most aren’t giving you grace. Hasn’t Charli proven thus far that she is an artist to trust? Very few have been quite so prolific over the years, and if this truly is her bid for global pop stardom, is it really fair to begrudge her that?

Despite it all, this kind of Stan disagreement and hyperbole is what many of us live for. The memes and GIFs and ridiculous metaphors are entertaining and silly and more often than not, intended to speak to a heightened form of expression rather than any truly intentional meanness. Only true stars can stir up this kind of passion, and few understand that better than Charli herself. But in all the fun, banter and tea, a sense of respect should always remain key. Artists do not exist to exclusively service the individual needs of their fans; they make art which they like, in the hope that we will like it too. We don’t have to lose our sense of humour, but we don’t need to be quite so personal about it either, knowing full well that our pre-emptive witticisms will likely reach their ears.

As Charli and many artists before her have proven, the further we push for a certain standard, the more we damage the creativity and freedom that made us fans in the first place. When ‘Crash’ finally gets its release on March 18th, no Angel is contractually obliged love it. But if we’re heading to Twitter to critique it, maybe we should ask ourselves an all-important question; are we really fans of the artist, or the person we think they should be?