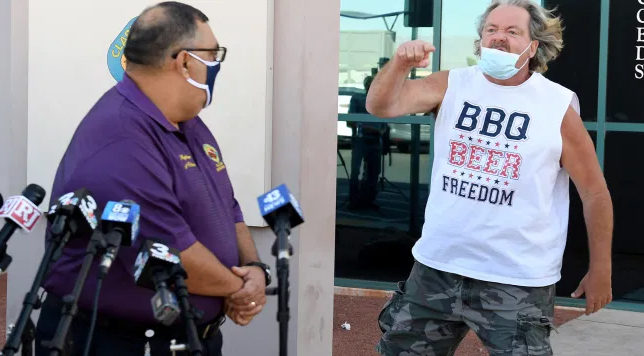 In a week where most Brits have watched more CNN than any other point in history, you may have witnessed one manifestation of Trump’s proposed unrest at the polls. As one weary poll worker in Clark Country, Nevada gave a press conference about how the vote count was going, it was stormed by what appeared to be a caricature of a MAGA supporter: a white man, in a white vest that read, simply: BBQ. BEER. FREEDOM. From hereon in, we shall refer to him as The BBF.

Mask around chin, The BBF did a little hop back and forth in front of news outlets while embarking on a completely unfounded rant about election theft. “We want our freedom for the world, give us our freedom Joe Biden, you know Biden is covering up this election, he’s stealing it!,” he shrieked. The reaction of those around him was perfect – there was no reaction – which prompted The BBF, like a teenager throwing a tantrum, to flounce off in a strop.

You can imagine how much the internet enjoyed this moment. Amidst the immense amount of stress the elongated wait for election results has brought, it was a ludicrous fifteen seconds that brought a little light relief. But the best bits were yet to come. Bored Twitter users wasted no time in remixing the rant in a range of musical styles.

Then we got a synthier breakdown.

Hardcore BBF was to follow. Warning: it’s a lot.

In a confusing, stressful week, full of fake news and uncertainty, high praise to anyone attempting to cut through it for even a second.