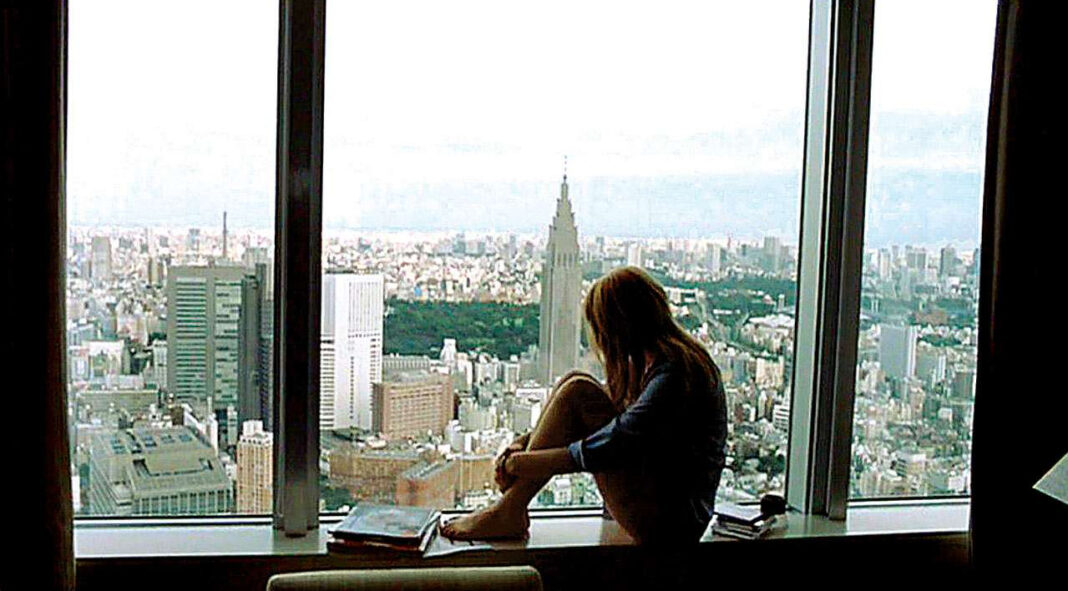 There’s something about lockdown that feels like being a teenager again – being trapped indoors waiting for life to begin, making grand-but-hesitant future plans. These factors make lockdown the perfect time to channel your inner-Sofia Coppola character – because pretending to be in a film might just be a coping mechanism that’s worth a try.

Coppola is adept at creating a dreamy universe from sadness and bleak metaphors – and music plays a crucial role. While her soundtracks vary – from 70s pop to shoegaze to 2010s chart hits – they all complement or enhance feelings of isolation: a feeling her characters know too well.

In The Virgin Suicides, The Lisbon sisters are trapped inside their house by strict parents. In Lost In Translation, Scarlett Johansson and Bill Murray play two Americans alone in Japan. Kirsten Dunst’s Marie Antoinette is a lonely teenager with no one to turn to. “I like stories where the drama comes more as an internal part of the character as opposed to from outside forces that make you change,” Coppola has said. “I always like characters who are in the midst of a transition and trying to find their place in the world and their identity. That is the most heightened when you’re a teenager, but I definitely like it at the different stages of life.”

Of all Coppola’s films, The Virgin Suicides draws the most comparisons to our life in lockdown. The Lisbon sisters are pulled out of school and grounded indefinitely by overbearing parents. Essentially trapped in their bedrooms, music is one of the only ways the girls still make contact with the outside world. When neighbourhood boys call them up, instead of talking, they play records over the phone. 1970s classics by Todd Rundgren and Carole King are the soundtrack to the boys’ infatuation with the sisters. They long for the girls from a distance; the way we are all longing for something – or someone – now.

In the film’s opening sequence, a quiet suburban street radiates with mundanity. Dogs bark and a siren approaches while Air’s eerie score hums lazily in the background. It could be a scene from lockdown, except the sunny sepia tones lend it a dreamy nostalgia that it’s hard to apply to a situation when you are still in the midst of it. Air’s haunting score is the soundtrack to the kind of suburban boredom typified by dog walks and tree surgeons and kids without a cause. It’s music to listen to when you’re walking down those tree-lined streets where all the houses look the same, on your allotted daily walk.

In Lost in Translation, there’s nothing like a faraway big city to make you feel small and insignificant. While we can’t travel to new places right now, having to give control of your life over to a pandemic can have a similar effect. Characters Bob and Charlotte are both alone in Tokyo; isolated by their culture shock and feeling directionless. Music by My Bloody Valentine, Death in Vegas and Sébastien Teller soundtracks the bustle and confusion as the camera pans the city. The famous whisper scene at the end of the film bleeds into the perfectly timed opening beat of The Jesus and Mary Chain’s ‘Just Like Honey.’ The track continues to play as Bob’s taxi drives out of Tokyo and the credits start to roll.

Coppola’s films are famous for their scenes where characters gaze wistfully out of the window. These introspective moments are enriched with emotion and layered onto songs that enhance those feelings. Since March we have spent a lot of time gazing at the world outside; not from cars or trains or planes but at the unchanging landscape from our bedrooms, living rooms and kitchens. In The Virgin Suicides, Lux chews on her tiara in the back of a taxi, staring out the window while Air’s ‘Highschool Lover’ plays. Charlotte in Lost in Translation looks up in awe at Tokyo at night from a taxi window to ‘Sometimes’ by My Bloody Valentine. In Marie Antoinette, Kirsten Dunst gazes dreamily out of a carriage on the way back from the masked ball where she meets her future lover as Bow Wow Wow’s ‘Fools Rush In’ plays in the background.

Nobody has ever thought of Marie Antoinette as relatable. If she were alive today, she would definitely be one of those influencers who keeps jetting off to Dubai. That said, Coppola paints a sympathetic depiction of the young queen. Despite being surrounded by extravagance and the commotion of the French court, Marie Antoinette is lonely and trapped in a role she didn’t choose. As for the soundtrack, who knew that 80s new wave would fit so perfectly in an 18th century period drama? The film opens with this question from Gang of Four’s ‘Natural’s Not In It’: “the problem of leisure; what to do for pleasure?” – an apt concern for these times.

Coppola’s cast of forlorn characters find hope through music. Amidst their sorrow, there are moments of joy – a karaoke booth, a homecoming dance, an 18th birthday bash. Until we can party again, our own sorrow can be lifted with daydreams of better days. For me, it’s running outside to watch the sunrise with a bottle of Champagne in hand, to a soundtrack of ‘Ceremony’ by New Order. But until that day comes, we can all find some solace in Coppola’s perfect soundtracks, while we wait ever-so-patiently for life to begin again.