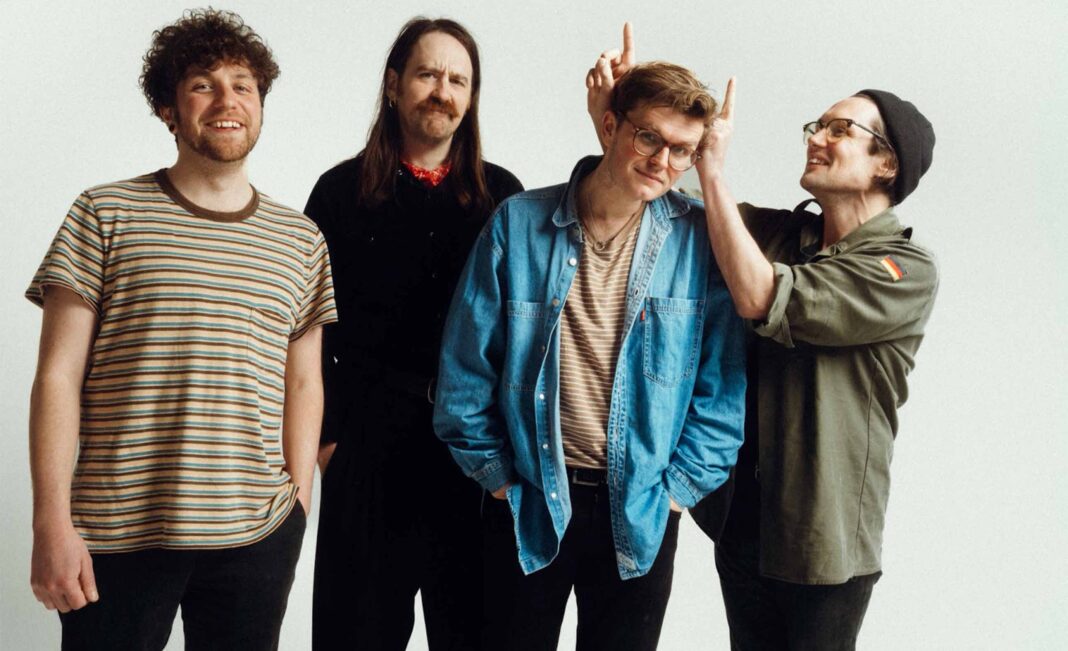 On paper, there’s a lot that sounds awfully familiar about Yard Act. Four lads from Yorkshire playing guitar music that could largely be described as ‘wiry’ with a vocalist fond of a spoken word-style monologue, the quartet seem to fit squarely into the recent post-punk scene that’s included the likes of Dry Cleaning and Do Nothing – another band ensuring that mentions of The Fall’s late torch-bearer Mark E. Smith will remain omnipresent in the music press for another 12 months to come.

An early clutch of immediately buzzy singles released across 2020 could even have given some credence to this notion, but on their debut, the group – frontman James Smith, bassist Ryan Needham, guitarist Sam Shjipstone and drummer Jay Russell – have ideas far wider than the shackles of that label suggest. If post-punk is built on minimalism, repetition and a certain kind of cynicism, then ‘The Overload’ has far more in common with its title than any of that: it’s got unashamed hooks, witty one-liners for days and too many ideas to repeat any tricks more than once.

It’s exemplified in the album’s title track – released as the record’s first taster and, you sense, a three-minute justification by Island Records as to why they’d signed this bunch of Leeds scene veterans to a major label deal. Careering out the traps with a perfect balance of clever linguistic wordplay and well-placed swears, it sets up Yard Act’s schtick from the off: smart music that doesn’t try and wear its smartness as some kind of badge of honour; big sing-along moments that can be catchy without dumbing themselves down. The track was both a BBC 6Music mainstay and featured on the soundtrack for FIFA 22, to hammer home the point.

‘Dead Horse’ follows – an ominous prowl of a song that bemoans Brexit Britain with hilarious accuracy (“Are you seriously still trying to kid me that our culture will be just fine/ When all that’s left is knobheads morris dancing to Sham 69?”), while previous singles ‘Payday’ and ‘Land of the Blind’ are respectively packed with a sort of rampant, Del Boy-ish chorus on the former, and a bassline and backing vocals that should soundtrack the entrance of a back-alley skulking baddie on the latter.

Throughout the record, you can pinpoint these sort of evocative moments and characters everywhere, Shjipstone and Needham creating the perfect frameworks for Smith to hang his sprawling stories upon. Simultaneously surreal and acutely familiar, ‘The Overload’ wrangles the two into a series of small-town tales – from the man who wants to sue God for creating slippery ice (‘Witness’) to the protagonist of ‘Rich’ trying not to lose the plot with their newfound wealth whilst descending into the moral quagmire regardless.

Each nugget here is densely packed enough to create its own mini drama; an obvious fan of the more-is-more approach, Smith’s lyrics are more like short stories set to music – working class soap operas dropped off at the indie disco. By the time they reach closer ‘100% Endurance’, you feel like Yard Act have taken you on a sort of Google Street View tour of their universe, past all the shop fronts and the characters, round the block and back again. Imbued with the same bleary-eyed hopefulness as classic Arctic Monkeys debut album finale ‘A Certain Romance’, it ends with the idea that there’s comfort in accepting that we’re all just tiny bit parts in this game of life: “It makes me stronger knowing that this will all just carry on/ With someone else, something new/ It’s not like there’s going to be nothing is it?”

READ MORE: Four bands to check out if you like post-punk and deadpan female vocalists