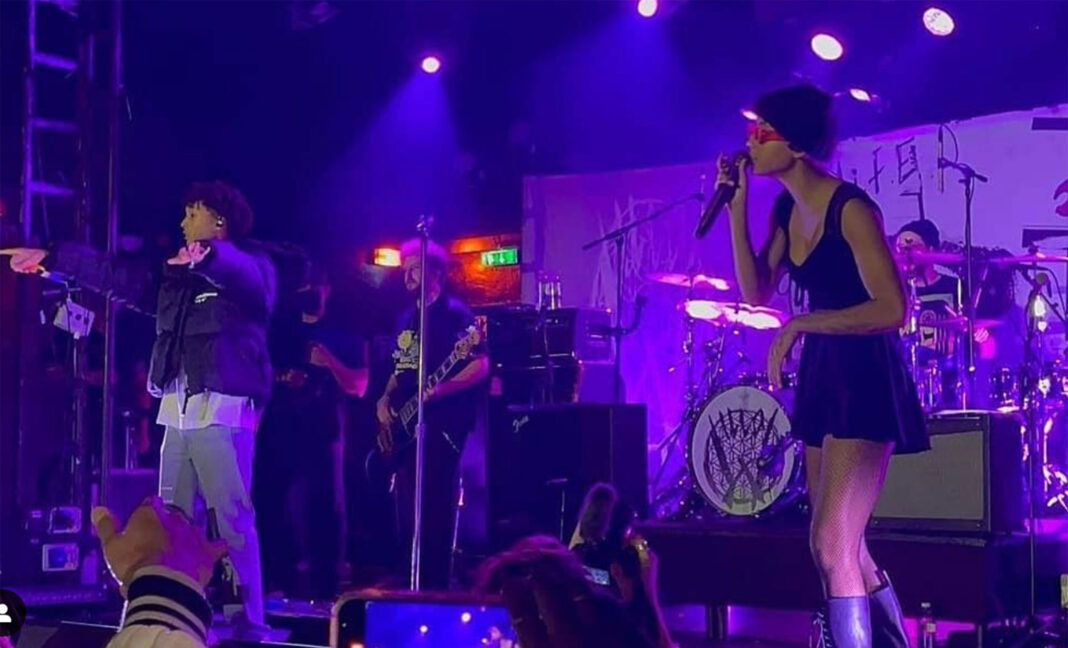 As a child, Willow Smith would watch her mother, Jada Pinkett Smith, perform with her band Wicked Wisdom to racist, sexist crowds, each night fighting to prove her place in the rock scene. Rock – and its many sub-genres – has long been a white male-dominated space, but as the tide turns, finally, in 2021, it’s Willow leading the charge.

Perhaps our greatest, albeit most unlikely, Gen Z rock star, Willow live exudes pure punk energy. She dons oversized sunnies and a woolly hat, taking them off to reveal her shaved head. It’s a friendly reminder she’s always been a rebel: she first shaved it during ‘Whip My Hair’ promotions in an act of defiance against pushy parents. She arrives wielding her guitar for opener ‘transparent soul’, shortly ditching it to pogo around the stage, and after a few songs, decides it’s time for a quick smoke, sparking up a joint on stage.

But tonight is as much about love and acceptance as it is resistance. Taking a moment to gather herself after the riotous opening trio of ‘transparent soul’, ‘Gaslight’ and ‘GROW’, she encourages the audience to chant “I am love, you are love, we are love”, creating a sense of belonging among a crowd of fans who’ve likely felt pushed out of this scene for a long time.

In the intimate Electric Ballroom, ‘lately I feel EVERYTHING’ shines bright. The low ceiling and tiny distance between the stage and front row lends itself to the record’s DIY feel and confessional lyrics. Despite this being Willow’s breakout album, tonight it still feels like a secret that only her and the ticket holders are in on.

Equally though, she could’ve easily sold out Brixton Academy on this album cycle. Her vocals are more than big enough to fill it. In fact, that’s one of the biggest highlights of this show, her voice. She sounds incredible, even between drags of a blunt, her ability to belt never wavers.

Another highlight is the surprise appearance from her brother, Jaden, who blasts through a support slot to a crowd who, minutes before his arrival, audibly muttered “imagine if the special guest was Jaden”. He gets a bit emotional mid-way through, noting how proud he is to see his little sister inspiring so many, and reminiscing how she used to support him on tour, the roles now reversed. Willow’s set ends with a duet between the pair, performing their collaboration ‘Summertime In Paris’, a gorgeous arms-waving pace changer to cap off a chaotic set.

While the crowd here couldn’t be further from those who heckled Jada, there’s a fearlessness in Willow, and when she steps on stage, it feels like she wants to prove herself too. Years of bobbing below the surface of the mainstream meant the cult following she’s developed are ready to hear older tracks like ‘Time Machine’ from her self-titled album, and encore ‘Wait A Minute!’ from her 2015 debut, both songs sliding easily into the set mostly comprised of 2021 material, and demonstrating that she’s been building up to a heavier sound for a long time.

2021 felt like a turning point for Willow, and tonight’s show is a marker of her success. Famous since birth, and after a brief stint as a child star in the early 2010s, it feels weird to say she’s just getting started, but the importance of this album cycle isn’t to be underestimated. A performance of viral hit ‘Meet Me At Our Spot’, her collaboration with producer Tyler Cole that blew up this year, prompts a sea of recording phones, and shows her mainstream potential. It’s clear that in the years to come she’ll be selling out much bigger venues, but for now, watching a born superstar on the cusp of becoming a bigger one is incredibly special.