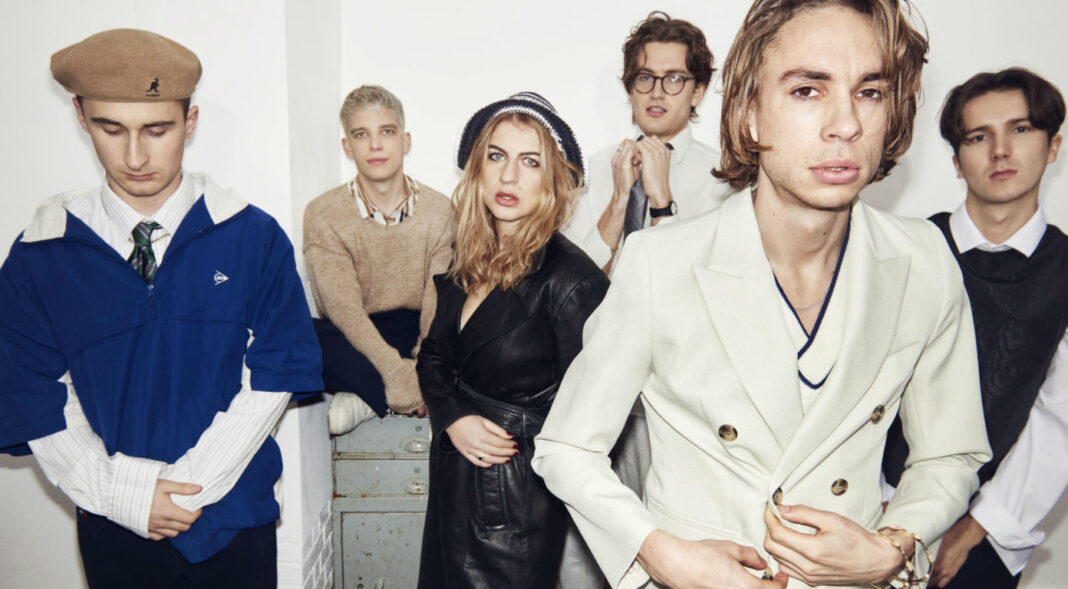 Sports Team are known for their spontaneous and rowdy live shows. A recent sweaty, raucous album announcement gig at their local Camberwell pub the Nag’s Head back in February resulted in fans jumping off tables and drummer, Al Greenwood, sustaining a head injury (which didn’t stop her from finishing the set). Their unapologetic attitude in interviews (and habit of insulting other bands) got them noticed and has built excitement in the run up to this: their debut album.

Sports Team love Pavement. They aspire to play live shows like Parquet Courts do. And they also have a keen, almost ironic, interest in Middle England. There’s a strong fascination with microcosms of white, English society found in the closed-off corners of quintessential English towns. With every interview, it’s increasingly clear that Sports Team are enamoured with this section of society, and that fascination is present on almost every track on this record.

The opening Knaggs-led song, ‘Lander’ mentions a few of these towns, including Aldershot and Staines. The song is a loud and punching start to the record, but doesn’t really go far enough. The momentum is maintained throughout, with no clear substance, apart from a nostalgic look at suburban life. Name-checking Aldershot isn’t a new thing for Sports Team – many of their lyrics are repeated across their catalogue of music – with the town also referenced in their earlier single, ‘M5’.

The album jumps between tracks new and old. 2019 single ‘Here It Comes Again’ follows ‘Lander’. It’s a classic wonky indie-pop song from Sports Team, but questions of accessibility arise in response to lyrics such as “like a burning British neck on an August evening”. It’s catchy, and somewhat harmless, but delving deeper you might find yourself asking if the use of “British” actually just means “white”, and if their interest in middle England has meant their idea of Britishness is less accessible to listeners of colour.

Recently released single, ‘Going Soft’ is unmistakably Sports Team. It’s happy garage rock, reminiscent of 00s indie bands blasted out on CD, and the accompanying video sends a hopeful message to their young fans that live music is a beautiful thing and we’ll have it back in our lives once again. Sports Team really do care about their fans, their relaxed, left-wing politics with a focus on the issues that impact young people, a sentiment particularly felt on ‘Here’s The Thing’.

Cut through to ‘The Races’ and Sports Team throw clever quips, ripping the Tory male stereotype to shreds, with lyrics such as “he’s coming over/ wants to talk about the war/ the way he’s going on/ you’d think he fought them off alone” and “he’ll never buy you a drink/ but he’ll let you know he can”. Again, these hark back to middle class tensions in suburban Britain.

Releasing eight out of 12 songs as singles doesn’t leave much to the imagination, and even a re-worked, somewhat better, version of ‘Camel Crew’ can’t change this. The unreleased tracks, ‘Lander’, ‘Feels Like Fun’, ‘Born Sugar’ and ‘Stations Of The Cross’ are fresh and exciting, though. No wonder they left it to the album to reveal them.

Sports Team are a gateway band. Their fans are young and hungry for music that reflects their unbridled energy and angst. They’ve cultivated a strong fan base of young, suburban people. It’s a clever brand; make songs about suburban life, attract suburban fans.

On the surface, Sports Team are more skilled than they give themselves credit for, producing fun, memorable garage rock. Unfortunately, their desire to emulate their idols is too strong to be a band that truly pushes boundaries. There’s also something that feels slightly off about Cambridge graduates essentially making music for other Cambridge graduates. It doesn’t help either, that they embark on an ironic tour of Margate each year, commenting on how surprised they were when they realised it wasn’t the romanticised version of a seaside town that they sing about.

‘Deep Down Happy’ is a mixed bag of joyous, brazen songs filled with a wild energy that has always translated into their live shows. Other journalists frequently assert that to ignore Sports Team would be a mistake. Whether this is true or not remains to be seen. They’ve certainly become an important and much-loved band in the indie scene. Musings about middle-class life, however, don’t make for the most accessible form of music and they will struggle to expand and diversify their fan base if they carry on reading John Betjeman.