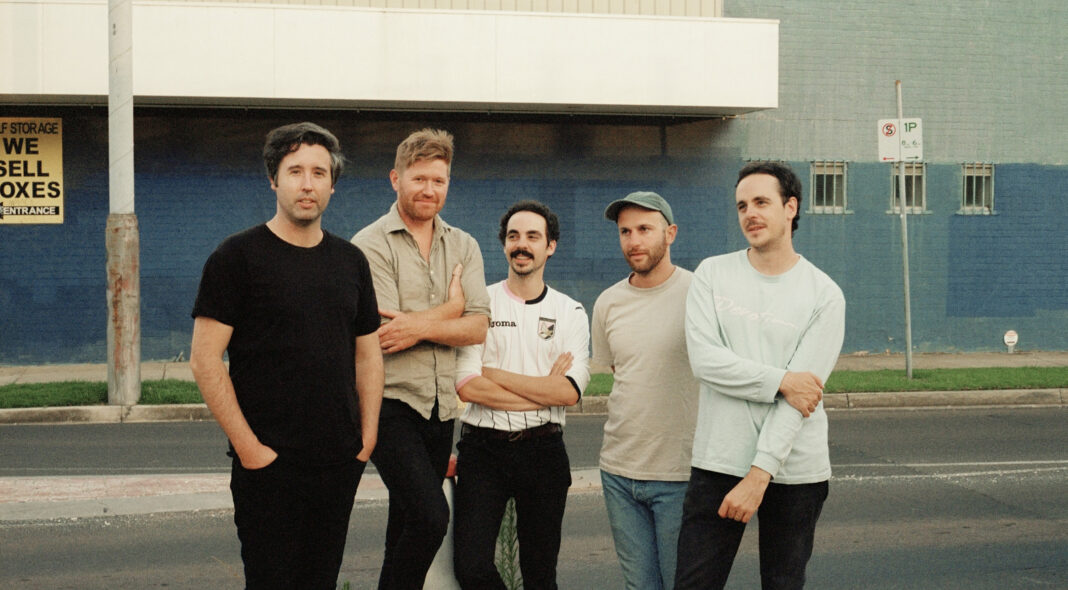 It’s been two years since we last joined Rolling Blackouts Coastal Fever and a great deal of boat rocking has taken place since. In seismic terms, the world has gone to total shit and if there was ever a collective sense of homesickness, a chaotically universal longing for departure and the simplicit sanctities of the last decade, it would be right now.

Since geographically scattering as a global tour de force, Rolling Blackouts Coastal Fever have discovered there’s an underlying vulnerability to an endlessly scheduled routine. Struggling to balance the circuitry life of an ‘in-demand’ working band, while fighting the disconnect of those nearest to you being equally, the furthest away, we may not have realised we needed a guide to existential liaison and yet ‘Sideways to New Italy’ is exactly that.

In an era of collective mis-course, the unknown facing the unknown paired with a whole load of communal displacement and identity crisis, there’s never really been a need to head sideways to anywhere and yet with their second release, Rolling Blackouts Coastal Fever take inspiration from a specifically constructed corner of the globe, the titular New Italy: a “tiny, 200-person village near New South Wales” where nothing sounds more inviting than settling down within the confines of a manufactured utopia and slipping into some now signature, textural home comforts.

‘Sideways to New Italy’ is five Aussie dudes and six strings seeking conceptual, seasonal change. Acknowledging that while for many, including the band themselves, music can act as an avenue for escapism, a way to live through the ventures of others in a universal game of collective rambling, a life on the road can lead to nowhere when touring is but a leap on a course to finding your way back home again – and that’s what RBCF serve to translate with timeless appeal.

Where debut album, ‘Hope Downs’ was caffeinated locomotive meets buoyant boogie, the kinda bliss-out in which you would want to burn yourself a mixtape and go on long scenic sprawls, this album is less trip and more: “here, the windows to the world have started clouding up and removing the panels might lead to further core damage”.

Meandering around parallels, ‘Cars in Space’ is an anthem for our timely mythological, summer soundtrack ideals. A crossroad love letter to better days and a fixture of tangible nostalgia, in a space of internalised, home-hailing daydreaming, it channels a witted directness to which this five piece excel in.

Standout ‘Not Tonight’ is a catchy little offering. A poppy-totem of its own rhythmic creation, it charms reverence with the same level of untouchably crisp swoon as waking up Christmas morning to find someone’s painted the tree silver, adorned it with fine strings of pearly idyll and then released it back into the wild to rediscover its roots. Finding its grounding amongst a sea of uncharted charge, it’ll moor its way onto your mind and soul in one big current of bedded strength.

When travelling ‘Sideways to New Italy’, companionship is recommended. Grab your best pal, have him walk backwards through some familiarly aesthetic scenery and call it ‘She’s There’- a cinematic tongue-in-cheek track about feeling like an outsider to everything via some rhythmically beloved, familiarities.

It’s surely not comfortable to face the dissolute and yet Rolling Coastal Blackouts Fever relentlessly demonstrate channelled optimism. Taking hold of its encouraged hand and then spending forty minutes spinning said expectations in reflective circles. This is a mutually personalised kind of sentiment – the sort in which Utes and memories of front lawns are less a phase and more an aspired way of living, a nod to previous releases while moving towards something structurally refreshed, it’s pretty damn absorbing and instrumentally instrument, to the group’s newfound revive.

Paving the way forward left right and centre, whatever route you’ve gotta take to find the way home to where the heart is, there’s no denying that Rolling Blackouts Coastal Fever are the real dealin’ dreamers regardless of where they dwell.