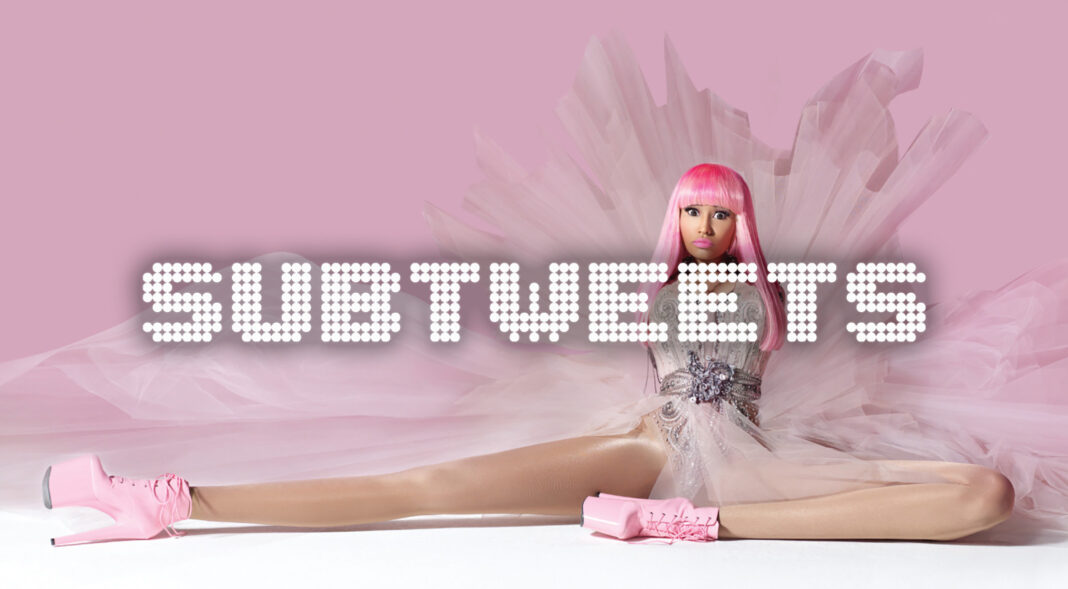 Did anybody have Nicki Minaj subtweeting Chris Whitty on their 2021 Bingo card? Not I, but if we’ve learnt anything recently about digital-era discourse, it’s that literally anything goes, particularly when it comes to matters of the pandemic. From everyday conspiracy WhatsApp groups, all the way up to high profile celebrities, everybody and their dog is involved in vaccination discourse, and not every opinion is fuelled by widely verified science.

In case you somehow missed it, the main situation can be briefly summarised as thus; Nicki Minaj says she won’t get vaccinated as per the Met Gala’s attendance requirements until she’s done further ‘research’ of her own, diving into a half-joking anecdote about how her cousin’s friend got ‘swollen testicles’ after getting the vaccine. She then proceeds to take on Boris Johnson, Laura Kuenssberg, Chris Witty, and Piers Morgan for their critiques of her tweets as a form of misinformation.

In the interests of clarity, we can note that Minaj has since stated that she has not ruled out the vaccine entirely or suggested that others should not have it, but that her refusal to do it in time for the Met Gala related to a desire not to travel with her young son. It’s been quite the rollercoaster week.

Over in the UK, an opposite drama was breaking out at the Isle of Wight festival. Engaging in some classic crowd-whipping activity, Kaiser Chiefs frontman Ricky Wilson invited the audience to wave their ‘clean’ hands in the air, shouting out for which vaccine they had opted for. With the video footage spreading swiftly online, the ‘Pfizer Chiefs’ were then mocked by vaxxed and non-vaxxed alike for being ‘cult-like’ and ‘vaccine sellouts’, with some fans even reporting feeling ‘bullied’ and alienated by the shout-out, renouncing their fandom.

Given that Isle Of Wight Festival only required vaccination evidence OR a negative Covid Test to gain access, it’s unlikely that Kaiser Chiefs’ message was really a calculated payday from Big Pharma so much as it was a vaguely cringey, awkwardly-phrased bit of stage patter after 18 months sat indoors. Nonetheless, it reminds us of how much we project on artists to think in the exact same way as every single one of their fans and to suppress their own feelings for fear of alienating others. It is deeply entrenched in indie and guitar bands, especially, that they should stand for something, to use their voice for ‘authenticity’ and to drive social change. And yet when they do, we don’t always like the results, claiming them to be divisive and upsetting. If you truly are decidedly anti-vaccination, should a popstar’s comment really be the thing to test your resolve? The decision to essentially call out unvaccinated fans onstage isn’t necessarily a friendly one on the Kaiser Chiefs’ part, but to claim it as ‘anti-rock ‘n’ roll’ doesn’t make a huge amount of sense, particularly when the vaccine is the very thing that has allowed artists back onto stages in the first place.

All of which brings us back nicely to Nicki, an artist who could never be accused of not speaking her mind. Whether it’s collaborating with the ever-controversial 6ix9ine or stoking the fires of a particularly vengeful section of her digital stanbase, Nicki Minaj has long known how to play the pantomime villain, unafraid to walk on the provocative side in the name of ‘speaking her mind’. It doesn’t seem to a huge coincidence that her pivot to big vaccination chat conveniently came to distract us from the recent news of a lawsuit regarding her involvement in financial coercion of her husband’s alleged sexual assault victim, but nonetheless, #ballgate’s day-long trending event has spiralled into nearly two weeks of vaccination discourse, with a great many lols along the way. Maybe there is a silver lining — wherever you stand on the vaccine, the lack of clarity around side effects is undoubtedly a big part of uptake hesitation, and wider, normalised discussion of them might help the more sceptical among us to feel more informed and prepared.

Being a popstar grants you a platform, and by nature of such elevation, artists are expected to use theirs with a degree of responsibility. In an ideal world, they would always speak with informed care and nuance, but Twitter doesn’t always allow – or more importantly, reward – that kind of placid engagement. The things that tend to be served to us algorithmically do tend to be the polarising or outrageous statements, the things that are likely to cause mass debate and indignant retweets from both sides.

When Nicki’s tweet blew up like her alleged cousin’s friends balls, both she and Twitter knew exactly what they were doing — they were paving the ground for memes-in-the-making, shaping the kind of ‘did you see this!?’ entertainment that keeps us all on their platform that little bit longer. When Kaiser Chiefs try to hype up the crowd, the intent is similar; an old-school tribalistic endeavour that encourages the audience to cheer for the response that applies to them, to boo the one that doesn’t. Neither are particularly responsible or even useful, but it’s entertainment, and it sells on both sides of the fence — incredulous clicks of #ballgate serve exactly the same purpose as sympathetic ones, cheers and boos are both an audible sign of a festival crowd’s attention.

Throughout the pandemic, misinformation has been a core concern. One has to hope that a singular popstar anecdote won’t be enough to invalidate legitimate science, but we also can’t expect artists to not have opinions, and these opinions naturally cannot align with 100% of their audience. There is a wider conversation to be had about how we reconcile our relationships with artists who are ‘problematic’ to us in some way, but the great vaccination debate likely isn’t going away anytime soon. In an age of great online polarisation, could both have handled their words with a little more even-handed grace? Absolutely. But whether we admit it to ourselves or not, we all love a swollen testicle tale; the shock, debate and ensuing humour are exactly what keeps fanbases afloat.