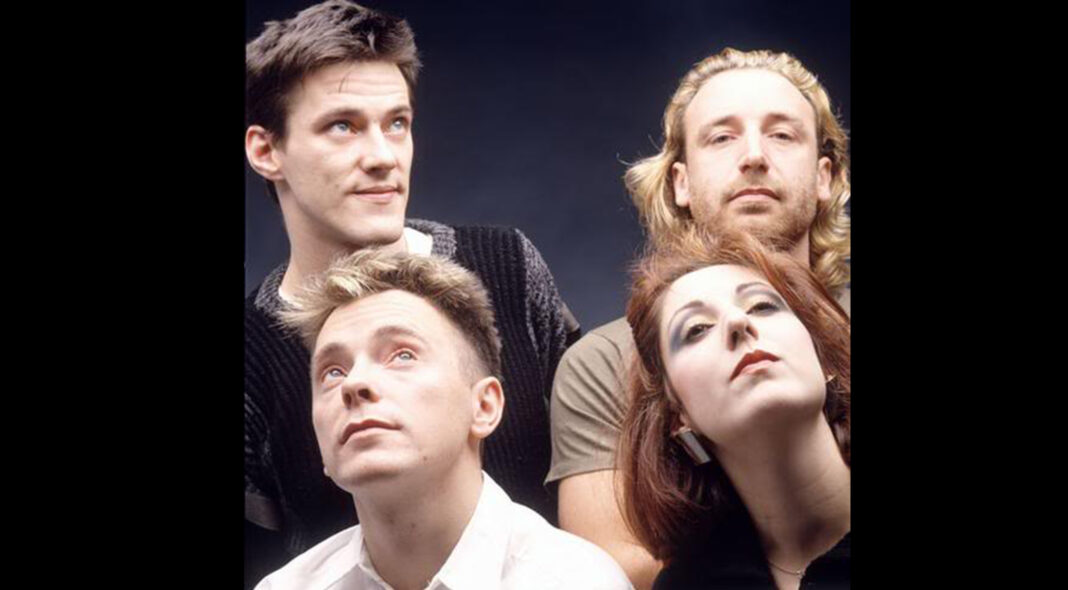 Tolworth Rec. was never exactly a hub for music and culture. It was an unremarkable suburban sports hall in a town notable for little other than a towering office block which was a landmark for drivers navigating the A3.  I’d only been there once before for a roller disco, where I remember the loos were full of girls with fags, feather cuts and menace… about as far removed from Charlie’s Angels as you can get. Then we heard that New Order were playing. We were fifteen and this was a big deal.

I remember heading out with my best friend Sarah in our DMs, grandad coats and homemade mini skirts. I’d been to the barber and had my hair cropped at the sides and it was crimped and spiked up on top. We wore thick black eyeliner, had our ears pierced as many times as our lobes could handle and thought we looked the business. We had our cigs and enough money for half a snakebite if we could get served. We swigged a bottle of Pernod on the way. Fashion in those days was often homemade and this one lad nicknamed Geezer rocked up in a bright blue boiler suit. To this day I’m sure he’d robbed it out of his mum’s wardrobe because it looked like a Sheena Easton-style jumpsuit. He’d cut the arms off and written New Order on the back in coloured in biro and had the piss ripped out of him relentlessly both on the night and for a long time after.

Exact recollections of the New Order gig have faded with time but some stand-out moments have endured and the existence of a quality bootleg provides a fascinating trip down memory lane. The internet also adds myth to my memory.

The Tolworth gig goes down in New Order history for a number of reasons, firstly there is a bootleg recording that apparently made its way to Camden market stalls with record speed via some enterprising poly students who had been employed as “crew” for the gig. I don’t know whether Peter Hook had a particular antipathy to bootleggers or whether a particular individual had provoked his temper but a friend recalls a gig in Portsmouth from the same era where he quite violently smashed a tape recorder out of some bloke’s hands with his bass. Imagine bands doing that these days to people with their phones out.

This gig is most remembered for the scooter incident. A friend smoking a spliff outside came back to say there was some sort of commotion in the car park. Then the announcement from the stage:

“Sorry to interrupt you here but we’ve got a very important announcement here. There’s someone who owns a scooter SMG642Y that’s SMG 643Y, now if they can go and remove it because it’s causing obstruction to one of the trucks. Thanks a lot and don’t spit at me.”

There was a lot of spitting back in the day. It was a post-punk legacy. The scooter apparently belonged to Mark Johnson, author of An Ideal for Living: An History of Joy Division, who religiously followed the band around and whom they apparently despised. As payback, his scooter was hoisted up on the tailgate of one of the equipment trucks.

The support act was a Manchester band, The Stockholm Monsters, who were from The Factory stable and produced by Peter Hook. At the time I didn’t know much about them and I can’t say much stands out apart from the fact, for which I forgive my fifteen-year-old hormonal self, that I thought they were pretty fit. Apparently, Noel Gallagher cites them as an early influence: “I started to get into music early on because all the older guys that lived ’round our way were in a band from Burnage called the Stockholm Monsters. They were the first band ever to come from Burnage and I think they had a hit with a song called Fairy Tales. From that you get into Joy Division, New Order and then it was The Smiths and then The Roses and then The Mondays – and then you start your own band.”

The bootleg is also an example of the band’s on-stage banter.

Bernard (introducing ‘Age of Consent’): ”This one’s a fast one for all you bollock brains.”

There were always big blokes around likely to rip your head off, usually the Kingston skinheads who put the fear of God into us. Some had local reputations that were deserved, others were fine when you got to know them but the boys I hung around with lived in terror of turning the wrong corner. We all knew the pubs, parks and chip shops to avoid.

The blokes I knew back then were typical of their generation; moody and depressed… or pretending to be. They lived for the NME, worshipped at the altar of John Peel and were massive Joy Division fans. They had their own band whose set finished with a cover version of ‘She’s Lost Control’. That was the most animated they got. Cool kids didn’t dance, unless doing an Ian Curtis impression. New Order were the ones who changed this. In 1983 Thatcher’s Britain felt bleak and oppressive but as I moved through my teens and on into my twenties, New Order were the band who helped flush moody teens out of their bedrooms and onto the dance floors in a joyful explosion of pills, thrills and bellyaches. The bleak atmosphere of the early 80s was banished and by 1990, Love had the World in Motion.