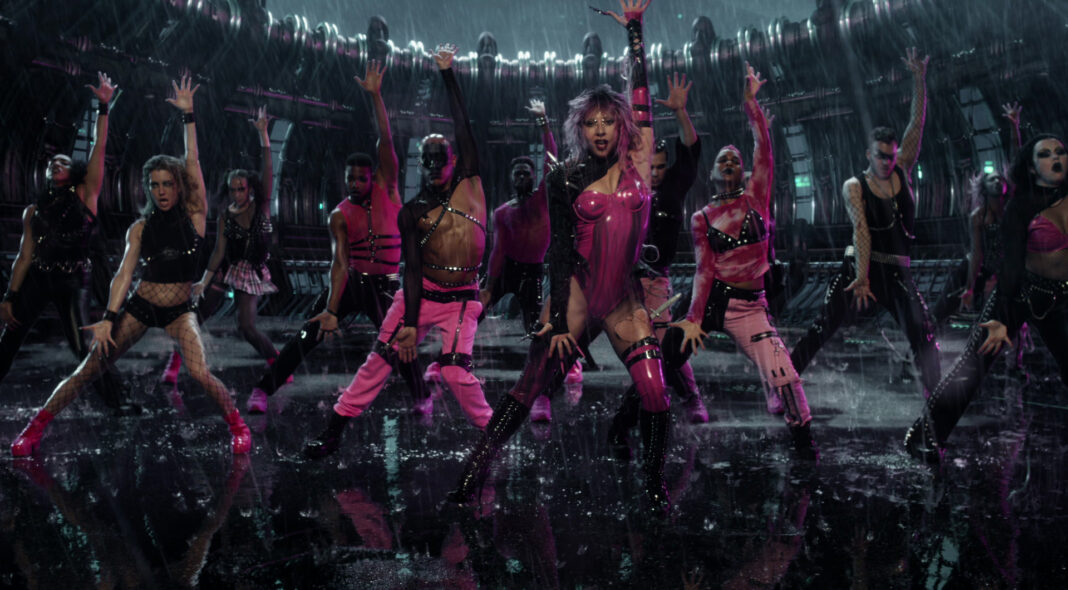 Ever since that bit in Flashdance when Jennifer Beals gets doused in water mid-way through an oh-so-raunchy chair dance (the chair, of course, being the sexiest of the furniture items – see also: Britney’s ‘Stronger’, Nicki’s ‘Anaconda’), pop stars have known that nothing says “high stakes drama” like a good bit of rain.

Rain in a music video can mean different things. It can say, “Look at all my emotions, falling in an easily understandable tear-like metaphor”. It can say, “Hey bitches, thought I was hot before? Now I’m hot AND QUITE DAMP”. It can ramp up the passion, the rage, the vulnerability. Rain, essentially, makes a good video better.

Of course, our current soggy queens of the genre are Lady Gaga and Ariana Grande, with their positively sodden clip for appropriately-titled new banger ‘Rain On Me’. But they’re not the first, and won’t be the last, to blow the budget on a few hundred litres of the good stuff. And so we ask: who did it best?

Lady Gaga and Ariana Grande – ‘Rain On Me’

Kudos to this one for not only raining water but also raining KNIVES. A dangerous new twist to the canon that we’re here for, even though it does seem meteorologically quite implausible (but we’ll let that slide because ‘art’). Gaga also gets full points for going gnarly with the theme and really getting a bucket-full to the face, although Ariana lets the side down by still looking completely perfect the entire way through despite being – in theory – soaked to mascara-down-your-chin levels.

Yes, Rihanna looks like a stone cold babe. Yes, this song is iconic. Yes, it has some CGI water getting flung about that actually looks a bit crap 13 years later (but in an endearing way). HOWEVER, during the whole of ‘Umbrella’, in which Riri REPEATEDLY sings about standing under said aforementioned umbrella, she only actually puts the damn thing up for approximately 0.5 seconds. Call Trade’s Descriptions, we’ve been conned.

Ah the mid-’90s, it was a simpler time. A time when all a boyband needed to swoon their way into a nation’s hearts was an unbuttoned shirt, a moody stare and a crew member on standby to douse them lustily at regular intervals. Well done Nick, Brian and the other three: you played your parts well. But that time is over, now go dry off and put a jumper on before you catch a chill.

Weddings! Funerals! An elongated guitar solo in the middle of the desert! Guns N’Roses’ epic truly has it all. And it ends, as only one of the most gloriously, unapologetically overblown rock videos of all time can do: with our hero Axl, mourning at the grave of his beau as the rain lashes down upon his lustrous locks. And scene.

Throwing out some moves that may have been partly responsible for getting her involved with ‘Cats’ (whoops), the vague premise of ‘Delicate’ finds poor famous millionaire Taylor briefly gifted the power of invisibility. Hurrah! Now she can be free to do normal person things like jump in puddles and dance in the rain, which is definitely better than having millions of fans and the ability to get whatever you want whenever you want it. She’s just like us! Splash splash splash!

Stormzy, ‘Blinded By Your Grace pt 2/ Big For Your Boots’ (live)

OK yes, this performance from the Brits 2018 isn’t technically a music video, but it’s also probably the most powerful, perfect example of rainy musical magic out there. In between ‘Blinded By Your Grace pt 2’ and ‘Big For Your Boots’, the grime icon delivers a freestyle about Grenfell whilst a steady stream of water pours down upon him. There’s no trickery, no pleasantries, you can see Stormzy fighting to get the words out as rain streams onto his face – the difficulty only heightening the drama and defiance of the moment. Even now, it’ll get the goosebumps out every time.

Why Sofia Coppola’s movie soundtracks are the perfect lockdown listening