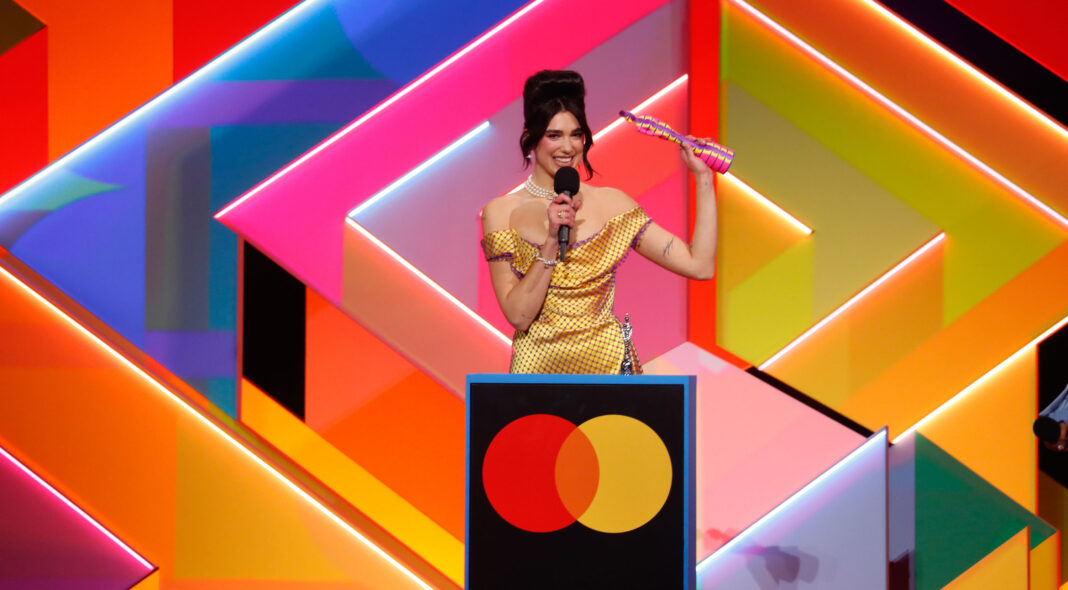 While the pandemic has been a serious obliterator of so much vital and vibrant entertainment culture, it’s also been a bit of a kick up the arse for awards ceremonies. In truth, many awards around the world had rested on the laurels of a half-funny presenter and uninspired performers, more attention paid to the afterparty tabloid antics than the show-spectacle itself.

It would be an exaggeration to say that the pandemic had been a great equaliser, but what it has meant is a closer focus on the music that deserves to be rewarded, and the ways in which we celebrate it. The camaraderie intimacy of the GRAMMYs was easily their most entertaining that the show has been in years, with each performer looking genuinely chuffed to be out of the house. Following their lead, this year’s BRITs began with the same ambitious creativity that would have likely been deemed too difficult to execute in previous years — Coldplay on a ginormous floating stage, Dua Lipa strolling down the abandoned tube corridor, a poignant performance of ‘It’s A Sin’ by Elton John and Years&Years that was easily the best of the night. Across the board, there was a sense of underdogs rising, credit being given to those who truly deserve both the critical and commercial acclaim.

And then there were the awards themselves. Honorary Brits Haim quarantined for ten days in the UK to bag Best International Group in person, Arlo Parks took home Best Breakthrough (as well as putting on a stunning sunflower performance of ‘Hope’), and Dua Lipa did the double, securing Best Female Solo Artist and Best Album. Billie Eilish took home another statue, and Rina Sawayama secured outstanding contribution to incredible sartorial choices (we might have made that last one up, but have you seen the red carpet pictures?). Right across the board, women have never been better presented at the BRITs, and they took the opportunity with gusto, writing speeches that nodded to the gravity of the past year and beyond.

When Little Mix finally won the Best British Group award that they had been working ten years for — the first time in BRITS history that a female group had won — they turned it into an epic ‘Mean Girls’ prom moment for the sisterhood; a piece of the tiara for Spice Girls, All Saints, Girls Aloud, Sugababes. All the while, they pointed out how ridiculous such snubs would be: “It’s not easy being a female in the UK pop industry. We’ve seen the white male dominance, misogyny, sexism and lack of diversity. We’re proud of how we’ve stuck together, stood our ground, surrounded ourselves with strong women and are now using our voices more than ever.” Newly pregnant and gleefully confirming their return to touring next year, they laugh in the face of the idea that you can’t be a mother and a musician at the peak of your profession, a testament to growth and rebirth after a difficult internal year.

A valedictorian-worthy speech from ‘Global Icon Winner’ Taylor Swift carried much the same message. Speaking about the importance of resisting the barriers that other people place before you and knowing when to stick up for yourself, the warmth she brought to proceedings was a glorious closer, her protégées Griff and Olivia Rodrigo likely swooning from the audience.  Whether it was the handwritten notes that Rodrigo left on the tables for everyone or excitement that artists seemed to have when greeting one another from a social distance, the spirit of real-talk empathy and solidarity felt similar to the GRAMMYs, a humanity that will hopefully linger long after the pandemic.

If the BRITs were to be critiqued in any way. It might have been nice to see them do more to elevate the community that sat in the stalls, hearing more of their stories firsthand. As part of the Government’s research-and-testing-led scheme to re-open live music, 2021 BRITs attendees included over 2,000 key workers, rewarded for an unfathomable year of hard work and personal sacrifice. While some of the winners did use the podium to speak directly to the crowd (Harry Styles nodding to the entire NHS, Headie One & AJ Tracey taking a jab at Boris Johnson in their performance of ‘Ain’t It Different’), it fell broadly to Dua Lipa to remind us of the shared-statue initiative and to shout out the need to give all NHS staff a payrise. It was probably one of the safer political statements of the evening to make, but for an artist not known for her outspoken nature, it was a bold one, following the emboldening thread of the evening. As more and more female artists take that courage to call things as they see them, we get closer to stamping out all kinds of industry and societal nonsense, from dodgy festival lineups and inequitable awards categories right through unspoken abuse and erasure of marginalised voices. We get much closer to a music industry where artists are allowed to be themselves, and aren’t censored for it, even if the ITV bosses do still remain a bit liberal with the use of their anti-swearing dubs.

By righting the unbalanced wrongs of the 2020 awarding list (where Mabel was the only British woman nominated across 25 mixed-gender category slots), the BRITs seems to be on an exciting learning curve to secure their future relevancy. They have already responded in kind to Rina Sawayama’s much needed campaign around the rules of citizenship eligibility, and for 2022, they have promised to review Sam Smith’s very reasonable suggestion of the eradication of gender-based categories as well as an ongoing consideration of the diversity of the industry-based shortlisting board.

With so much talk of a ‘new normal’ over the past few months, there are some newness’s that actually feel good, the one bright-spot of recalibration that comes from a period of hardship. We all know that post-pandemic life will take some adjustment, but by the time we all crowd back into the O2 in 2022, it’ll be fascinating to see what sentiments linger. We all adore an outrageous ceremony of glitz and glamour and champagne swilling, but we shouldn’t lose that sense of humility and artistic outspokenness either, the parts of a ceremony that really do feel like gathering with friends. In the words of Taylor Swift, there is a whole new generation just waiting to be inspired; with the right focus and determination, maybe awards ceremonies can be part of showing us all a better way.

READ MORE: The maddest and most memorable moments in BRIT Awards history