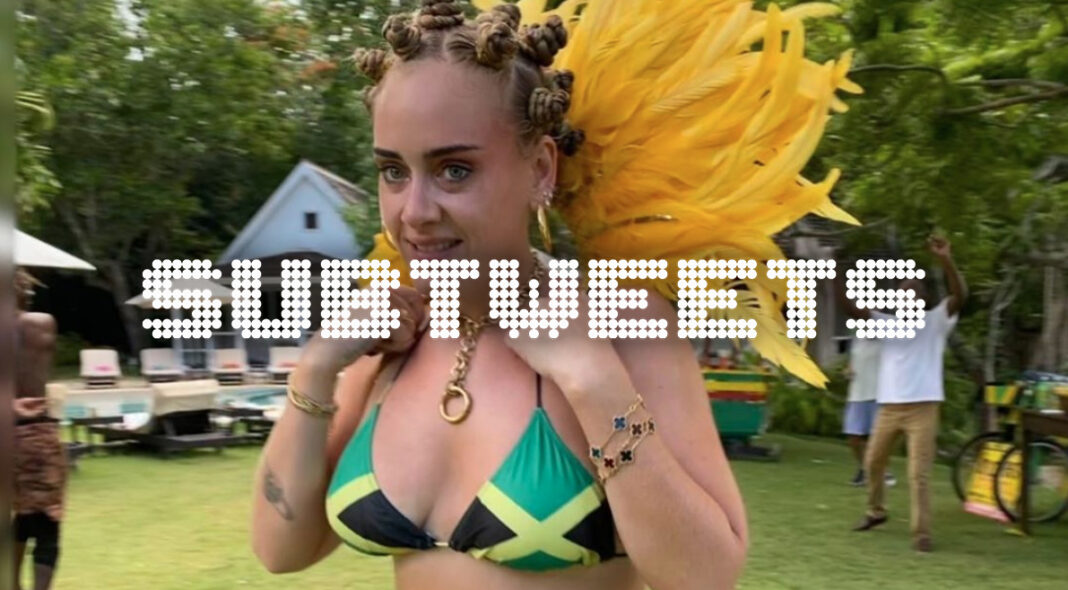 During most of lockdown, the lethargy of staying indoors has left me often sleeping in, checking my phone from bed for the day’s Twitter news before I can properly force myself to get going. When I first saw the image of Adele, clad in a Jamaican flag bra and sporting tight blonde Bantu knots, my bleary eyes merely scrolled past it, assuming it to be some kind of weird photoshopped meme of the day. But then it appeared again, and again, and as the coffee kicked in, my eyes stretched wider – Miss Adele had certainly gone all out for carnival.

It is worth stating at this point that the argument about cultural appreciation and appropriation is one that has waged an internet war for as long as any of us can remember. For the uninitiated, cultural appropriation can be best summarised as the idea of an empowered group adopting iconography of minority culture for fashion or profitable reasons, without acknowledging the rich history or resonance of the item. It’s the ‘tribal’ bedcovers you can buy at Urban Outfitters, or the white girl sporting a bindi or Native American headdress at a festival. It’s the Kardashians claiming that they invented ‘boxer braids’, ignoring the centuries of African women before them who were openly mocked for the same style. It’s rude and offensive and can be very difficult to explain if somebody is determined to see those items as mere aesthetics. On the other hand, appreciation is something much more positively intended, paying appropriately timed homage and respect to multicultural experiences outside of our own. A white listener enjoying hip-hop, for example, or wearing a sari to attend an Indian wedding. Often, cultural appropriators think that what they’re doing is appreciation, because they don’t think of themselves as racist, but they have forgotten to do the all-important self-education before they sport the look.

With all this in mind, the Twitter discourse in response to Adele’s carnival costume was interesting. We all love Adele, and we know from her Tottenham upbringing that she is not immediately removed from the Black-British communities of carnival, looking down loftily upon them from afar. Neither was she profiting from it, or trying to make it her everyday look – she was actively paying homage on the day of Notting Hill carnival, in the context of not being able to be there in person. Many Black-Britons came to her defence, not exactly applauding her for her outfit but accepting that she was OK to wear it, cracking puns about her new ‘Caribbean’ album or sharing reggae remixes of her songs. In stark contrast, American Twitter users were livid – without that innate understanding of Adele’s background or intentions, they went to town on her in the way that the internet likes to do, eradicating any nuance.

Having weighed it up, the problem for me, as a Black-British woman, is that when you don a costume for the day, you get to take it off. I can tell you, nobody was patting me on the back when I wore Bantu knots as a kid – they were crowding around to pat my head without asking before whispering amongst themselves about how ‘weird’ it looked. In the binfire of bigger world problems and racism that is 2020, Adele’s awkwardly posed photo didn’t cause me intense distress so much as a heavy eyeroll, but it was a solid reminder that even our favourite artists are sometimes incapable of reading the room, and we in turn, tolerate behaviours from our faves that maybe we wouldn’t if it were someone else. I’ll certainly get over it by the time a new album rolls around, but there’s still a small part of me that wishes Adele’s had simply thought “google images hun?” and shared a more representative photo of the carnival experience.

Maybe I could have tweeted about it. But then I also would have had to tweet about the fact that not all carnivals are necessarily Jamaican in origin, that Bantu knots are actually really bad for your scalp if your hair isn’t thickly textured, and that we’re still having this row at a time where little Black girls are being actively kicked out of school for having ‘flashy’ hairstyles. I’d have had to tweet that I still loved Adele, that I don’t think she’s a bad person, and that I believe the line between appreciation and appropriation is an incredible thin one highly dependent on personal history, local sensitivities and wearer intention. There simply aren’t enough characters for that, and sometimes Twitter isn’t the place. If Black-Britons didn’t seem overly fussed this time, maybe it’s because making a meme seemed easier than dredging up yet another discourse debate that only serves to depress you further about the state of the internet. Maybe Adele got away relatively lightly this side of the pond, on this occasion, but maybe it’s just because we’re all bloody exhausted. I know I am. In fact, I might just get back into bed with my book – Emma Dabiri’s Don’t Touch My Hair. If all of this has you looking for some true cultural appreciation, I’d highly recommend.