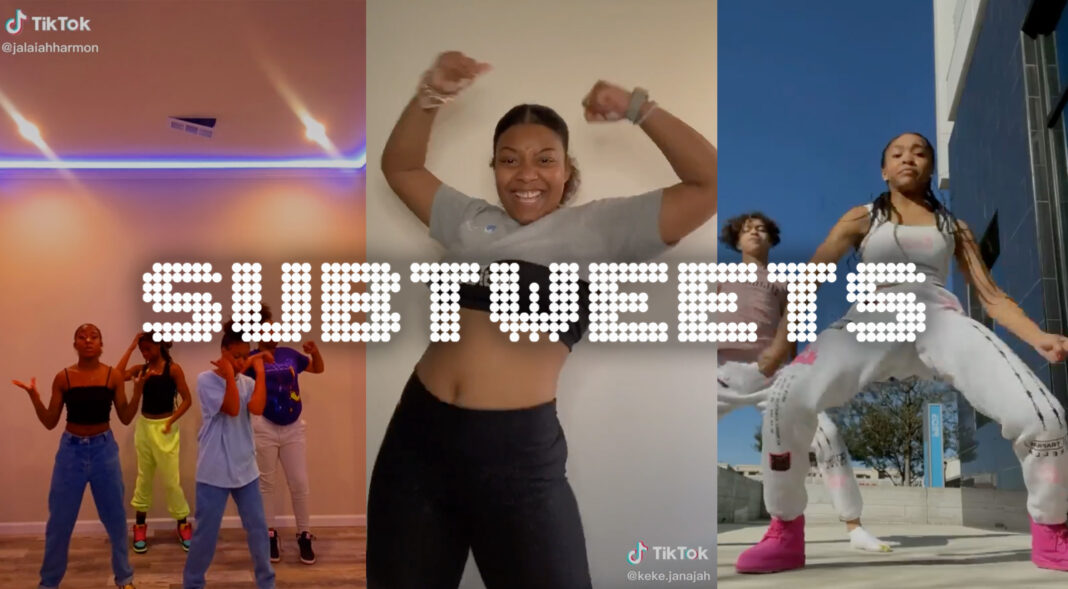 This column might be called subtweets, but we’d be missing a serious trick if we didn’t recognize just how much fan-led activity and important pop-cultural discussion goes down on TikTok. Whether you downloaded it just to pass time in a pandemic or are a seasoned creator on the app, there is no denying that it is very much the social media platform of the moment, breaking musical and creative careers in much the way that MySpace and YouTube have done before it.

With that comes great opportunity – the chance to greet the world from your bedroom, to become an overnight success on a minimal budget, to be the leader of your own viral trend. But there remains a big sticking point; beholden to an algorithm that decides what popular should look like – and who should reap the rewards of virality – TikTok has long been embroiled in hefty criticisms of shadowbanning, intellectual property mismanagement and mistakenly crediting white creators with the labour of Black artists, a notion that has become particularly problematic when it comes to dance.

Dance trends are an instrumental part of TikTok’s success, the lifeblood that separates it from Instagram stories or even Vine (RIP). The great majority of TikTok trends we know best – K Camp’s ‘Lottery (Renegade)’, Cardi B’s ‘Up’, Megan Thee Stallion’s ‘Savage’ – have been created by Black choreographers, often teenagers, with little expectations but maximum effort. And yet when those trends catch on, it is white influencers who are appearing on television, white influencers securing the promotional deals, and white creators taking credit. When Black creators like Jalaiah Harmon (‘Renegade’), Keara Wilson (‘Savage’) or Mya Johnson and Chris Cotter (‘Up’) are acknowledged by the mainstream media, it is usually as a sheepish afterthought, the result of the outcry from black fans and creatives. If influencers Charli D’Amelio and Addison Rae can lock in lucrative make-up lines and TV deals off the back of their dance performances, why can’t the people who actually invented the dance?

All of which goes some way to explain why black creators have had enough, and are showing their dissent by going on strike, an impressively unionizing move normally associated with more traditional workplaces. When Megan Thee Stallion’s certifiable rump-shaker ‘Thot Shit’ dropped, they announced that they would not be creating a dance and that white creators were on their own when it came to devising content. To say that their presence was missed would be something of an understatement; without Black creatives, the entire system of TikTok’s cultural impact weakens, and users of all races are reminded just how instrumental multi-cultural investment is for new engaging forms of entertainment, and to vital conversations of both community solace and education.

Striking dancers were relatively difficult to find to chat with – after all, they’re on strike – but we did speak with Amanda, co-founder and creative director of @defineandempowerco, a Black feminist education and consultancy collective that has amassed over 24,000 TikTok followers. Having experienced shadow-banning herself for educational content that she uploaded about the historical experiences of Black women during slavery, Amanda was moved to make a series of informative TikTok videos about the strike.

“As a PhD student studying Black feminism and Black history, I immediately identified the white appropriation of Black creators’ TikTok dances as being part of a larger history of Black people being uncredited and underpaid for their work,” says Amanda. “As someone who believes that Black feminism is a way of life and not merely a theoretical concept, I felt it was necessary to contribute my educational expertise to confirm Black creators’ suspicions that they were not being fairly recognized or compensated for their work. There are historical precedents for so much of the violence and mistreatment that contemporary Black people face.”

The lack of a viral dance trend for ‘Thot Shit’ might seem like a one-off way to take a stand, but Amanda’s rightful connection between TikTok and a wider endemic issue strongly displays the need to consider just how many industries – media and otherwise – are built on the backs of Black labour without appropriate credit or recompense. The creative industries have long made a habit of repackaging Black-coined art in more supposedly ‘digestible’ formats, conveniently forgetting to acknowledge its inspiration. It was there in the earliest beginnings of rock’n’roll, it’s still there in the ‘sassy’ lipsyncs and the ‘digital blackface’ memes that form so much of our shared shorthand internet humour. In 2021, we may have come far enough to acknowledge that Black Lives Matter, but we haven’t quite figured out how to show appreciation without outright theft.

One option might be to change the platform entirely. Having seen the issues that Black choreographers are facing on TikTok, Silicon Valley entrepreneur Kwasi Ohene-Adu has devised an entirely new app – Groovetime – which will use Ai to offer real-time guidance to audiences who wish to learn the hottest new dances, while also protecting the intellectual property of its initial creator.

“We’re building a marketplace platform for movement, where dance creators own, teach and monetize their moves,” he says. “The technology we’ve built for helping people learn how to dance also happens to be great at fingerprinting dance moves, which means we can recognize if a dance choreography looks similar to another piece of choreography. With this, our platform will naturally solve issues of appropriation by always ensuring that we highlight the original creator of a piece of choreography. This original creator will stand a better chance at getting paid for their creative work than on TikTok.”

The need for symbiosis is something that is vital to the future of dance and user-generated apps, TikTok or otherwise. Hip-Hop and Black Culture are undeniably more mainstream than ever, and while everyone should be able to enjoy the freedom of musical expression that dance has to offer on offer, there are ways to do so thoughtfully.  A healthy way forward relies heavily on the industry itself — more effort from the media to look deeper than the top result when offering deals and collabs, more active accreditation to original choreographers — but also in our own consumer behaviours, thinking a little bit harder about what we share, or which particular spaces we take up without offering due credit.

Given that TikTok admitted in 2019 to censoring posts from ‘special’ (i.e. not cis, able-bodied or slim) users that they deemed ‘vulnerable to bullying’, now is the perfect time to interrogate the modes of algorithmic bias and clunky design which determine how ‘popular’ or ‘appropriate’ is decided, and whose lens it is perceived through. A serious investigation into TikTok’s curatorial design should surely be on the cards, especially given users claims of disproportionate censoring of BLM or race-related content.

#BlackTikTokStrike might be a very small part of a much wider issue, but it is a welcome reminder that no social media platform can take its user-generated content for granted – if you’re no longer serving your community, your community won’t serve you, and there is a very fine line between creating a safe space and censoring those who have very good reason to speak out against the status quo.

“Much of the work I do is about creating an independent space where Black women and other women of colour can freely share their creative ideas, and the strike will definitely change the way I use TikTok in the future,” says Amanda. “I’m much more likely to go out of my way to amplify the voices of Black creators by commenting on, liking, and following their work – people like tracy.oj, whojazz and arri.arii. TikTok needs to recognize the ways in which its algorithm disproportionately silences creators of colour; it cannot prioritize white fragility over the true historical experiences of Black women.” However long this strike takes, we truly hope that TikTok are listening – this is a dance that truly needs both sides to be in step.