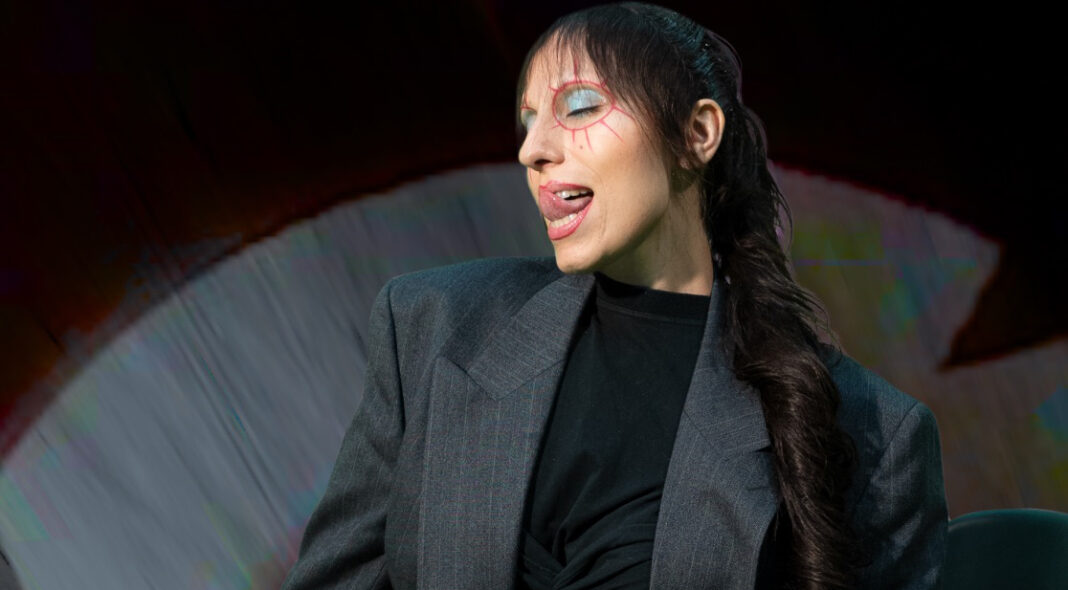 Being Robyn’s protégé, it should come as no surprise that Zhala Rifat is a magnetic performer. Last time she played a live show in London – at Shoreditch’s long-since-demolished Red Gallery – she accentuated her maximalist electro-pop with outrageously kitsch decor, clouds of atomised rose water, and an onstage accomplice performing a set-long striptease that ended in full nudity. Half a decade on, the Stockholm-based singer-songwriter might have toned down the theatrics a little, but the recent live-streamed launch for her comeback single ‘Holes’ – staged as part of Robyn’s Club Domo – simply proved she’s never needed gimmicks to captivate.

Introduced by the ‘Dancing On My Own’-superstar as “my favourite artist in the world”, Zhala displayed a quiet power as she reprised her lithe harmonies for a live performance of their 2018-duet ‘Human Being’. As a viewer, you were largely left wondering why she’d left it so long to perform in public again. The answer, it transpires, is complicated.

Speaking from Belgium where she’s currently making her acting debut in an arthouse drama by Swedish director Lovisa Sirén, Zhala looks back on the period touring her self-titled debut with distinctly mixed emotions. On the one hand, the album got great reviews, impressing critics and audiences alike with its unique take on synth-pop, which fused club music with the Kurdish folk influences of her youth. On the other, she suffered intense and unfair scrutiny from some quarters as a result of the LGBTQ+ themes and ideas of body positivity expressed in her live performances.

“I got a lot of hate from Middle Eastern people and Kurdish people because I had signs saying “gay” onstage alongside the Kurdish flag…” she sighs. “I felt like a lot of people thought I was trying to be provocative but I was just trying to liberate myself. And that really affected me. Because, for me, it really comes from a place of love. Then there was a [critical] article that spread throughout Middle Eastern media, and then someone faked an interview with me. It was a bunch of drama and I got really negatively affected by all the exposure.

“So, until this year, my priority for the last couple of years has not been music. I had to shift things in my life. I needed to build a stronger foundation and find ways to be human. Like, how do I start my day not from [a place of] stress? And how can I learn to calm my nervous system? I was in a constant place of PTSD and I needed to sober up and [undergo] a period of deep healing.”

Putting her career on hold for several years, Zhala explored bodywork, meditation and various talking therapies, and spent long periods living in total isolation with her wife Luella, all the while safe in the knowledge that she had the full support of her label, Robyn’s imprint Konichiwa Records. Zhala is fully aware how fortunate and rare a position this is for an artist in 2020.

“Nowadays artists need to be really fast with their releases because [of the idea that] people will forget you, but that’s not at all in tune with my artistic process. For five years I’ve been like, ‘I’m going to come back soon, wait for me, please wait,’ and then the pandemic hit and two weeks before the release of ‘Holes’ in May I told my label, ‘I’m sorry but I don’t think I can do this right now. Like, I can’t think about doing an interview when this is going on in the world. It just doesn’t make sense to me.’ And they were like, ‘That makes sense.’ They’re so fucking nice. And it just makes me want to give my all when I have that kind of support.”

‘Holes’ eventually arrived in August, and it was absolutely worth the wait. Co-written with and produced by Olof Dreijer of the Knife, the song began life as a conceptual piece commissioned by Scandinavian performer/choreographer Amanda Apetrea, before being shaped into a more accessible pop structure, albeit with abstract lyrics, a serpentine vocal melody and some deliciously Knife-esque steel pan sounds. “I think it’s very existential,” Zhala says of the finished track. “That’s where I am spiritually: dissolving in eternity.”

Konichiwa Records have commissioned a series of stylistically distinct remixes to accompany its release, including reworkings by Bolton-born Berlin-based electronic artist Planningtorock, Argentinian producer TAYHANA and London collective Deep Throat Choir. As a former chorister herself, Zhala was particularly impressed at the synergy of the latter collaboration, especially as the artwork for the single incorporates imagery from an endoscopy.

Mostly, she’s just happy to have broken the creative deadlock, and to have done so while reaching new heights creatively. “Having thought I was never going to get to the point where I was ready to release music, I’m so relieved,” she beams, discussing the positive response to the track so far. It almost feels like the musical world in 2020 is far more in tune with Zhala’s left field pop imagination than it was back in 2015? To some extent she agrees with the theory.

“I mean, in my head [my music] always made sense. I was like, ‘This is pop music with elements that are popular to me.’ But you’re right – music is super weird and out there now – even the really commercial stuff. And I love that. I feel that maybe I am allowed to exist in a more open way now, and that maybe this is more of a time that matches who I am. I feel happy. I feel strong. And I feel really inspired to release more.”

A second album is already in the works, potentially featuring further collaborations with Dreijer, as well as with Charli XCX/Lana Del Rey-collaborator Patrik Berger. When asked about deadlines, however, Zhala gives an extremely tentative release date of “sometime in 2021,” while wearing the contented grin of someone at total peace with their current circumstances and in no hurry whatsoever.

“I wanna tour more, I wanna collaborate more, meet more people and if I can work on other creative stuff that would be amazing,” she says of her future plans. “I hope I am in a place musically where I can take advantage of my flow in a better way. But also enjoy it and be in the moment. I want it to be playful. I want it to be fun.” To which we can only say, Amen.

With the Eras Tour, Taylor Swift has taken squad goals to the next level