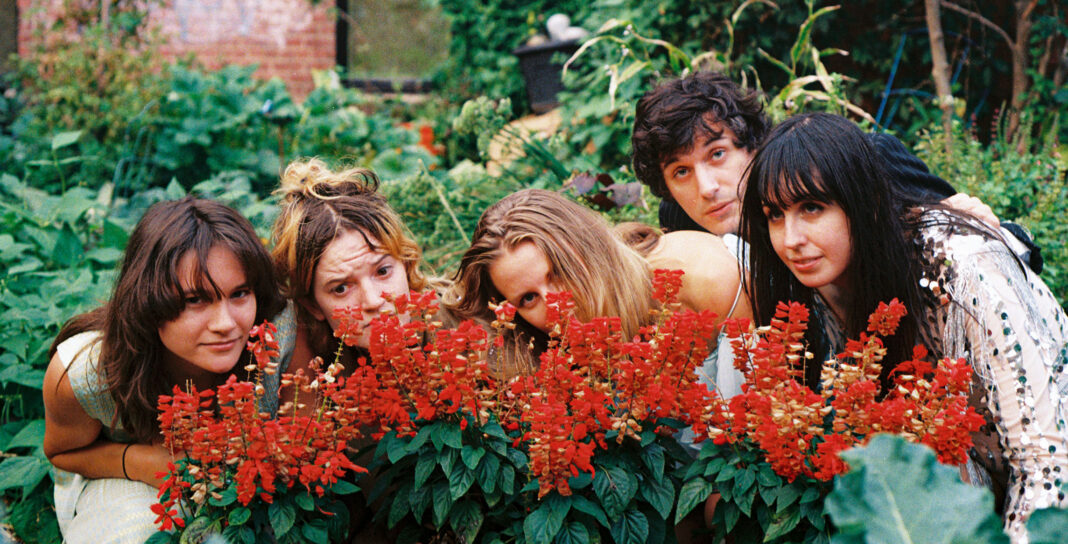 Gustaf have only just released their first single but the Brooklyn band have been quietly amassing a secret club of fans since 2018 via their immersive (and very fun) live shows. The group of five friends built their buzz touring with fellow New York bands, Bodega and Public Practice but have just dropped their first single: infectious post-punk track ‘MINE’.

The song, and its accompanying music video sees lead-singer, Lydia Gammill, stomping through the streets of Brooklyn, lipstick and ice cream smeared across her face. As a first release, it sums up Gustaf pretty well: a little bit silly, but with riffs that don’t mess about.

For one of their very first interviews, we spoke with Gammill about being compared to 80s’ New Yorkers ESG, gigging in restaurants and shoe stores and how comedy and ego inspires the band’s latest record.

Where did the name Gustaf come from?

It actually came from this poster in my room from the National Museum of Stockholm. I wanted a name that was less than five syllables, looked good on a T-shirt and was somewhat ambiguous ‘cause at the time no one really knew what the project would ultimately be.

Tell us about how it all began

Tarra plays in a bunch of bands and two years ago she had to get her van down to SXSW so that her other band with Tine’s (Ex-girlfriends) could use it for a tour. She asked if I would help her drive it down and I said ‘only if I could play shows, so we ended up pulling the band together and had shows booked before we had a name.

You’ve been compared to funk-rock band ESG. Who would you say influences and inspires you?

Sonically, ESG, yes! We definitely have that simple groove mind-set. [Personally] It comes from a lot of different places. Our tagline ‘Audio drag for ego slobs’ was inspired by Laurie Anderson; she used this vocal pitch pedal that she invented as the ‘audio drag’.  She developed that whilst on tour with William Burroughs – a famous misogynist that didn’t like women. She was fascinated with him and wanted a way to interact with him and so she put on this vocal thing as a way of putting on this character to break through to that. And then an ego slob is someone who does a bad job of interpreting the outside world, within the context of themselves.

You’ve been tagged in a bunch of videos from your live shows and it looks like there’s a lot of hype there and it also looks like a lot of fun and that you’re not taking yourselves too seriously. How would you describe your shows to someone that’s not seen you yet?

I don’t take my ego too seriously; I do take the work seriously. In my early 20s I was into improv comedy and whilst performing is something I love to do, I don’t want to get up there and act holier than thou. We’re all full of shit, we’re all a joke and that’s kind of beautiful and I’m gonna talk about that sincerely.

Our shows are a lot of fun, we have a nice community of fans – it does feel like you’re going to see a lot of your friends. It’s a very warm and fun environment and it’s important for us to reach every person in the room and let them know, you know they’re there. We like to talk to people, interact with them and share the room.

You did a mini US tour back earlier in the year and had a pretty legendary show with Feel and Cumgirl8 at LA venue Zebulon – what are some of your highlights from those dates?

We played at a kind of deli restaurant called Aracta in Californica once. We also did a residency at Baby’s Alright in January and that’s a fun place to play as it has a great sound and they feed you. Anywhere we can get a staff meal, we’re very excited about!

For me, the most exciting thing would be to get in front of a big crowd – our biggest so far was about 600 people and that was wonderful and energising. Just thinking of a music venue packed with people and just being able to yell at all of them and spit on them…. maybe not spit but yell into the air – it’s pretty much the same thing!

Vram: A magic leaf blower that when it blows leaves it turns them into $100 bills.

Mel: We won’t need anything else if we get that leaf blower Vram’s talking about!

Lydia: We eat a lot of Houmous. But maybe a kettle and perhaps a nice shower.

You are pretty low key on the internet. But one thing we came across is a comment from a fan on your YouTube that says: “I know you guys from somewhere. Was it the shoe shop? Was in the music shop? Was it the garden? Is this real?” – where did you meet CtahhR? And was it real?

It was the shoe shop. Last year we planned a West Coast tour, starting in LA – SXSW – oh boy what a time! One of the first shows was organised over Instagram with someone who had seen us in NYC and it ended up being in a sneaker store. I think it was the shoe store in San Diego!

Have you ever had any weird fan moments?

Our fans are very kind and wonderful, up until now it’s been a secret network as we hadn’t had any music released – if you knew us it would be from a show we were playing live. One time we did get into the habit of selling or giving away our hair at the merch table. We were all living in the same house in LA and one of our friends who was staying with us cut hair. So, she cut all of our hair one night, so I thought it would be funny to put it on the merch table. One of our good friends Joe has the hair, I don’t know what he’s done with the hair, but I know he will not curse us with the hair.

What’s one thing you would like people to know about Gustaf?

Oh, we’re a great time! and would love to hang out with you all when it’s a safe time to do so. There’s a lot of humour and sincerity in what we do. The band is full of a lot of talented and creative people. Everyone has their own style, we all dress up and are five separate entities all moulded together to make this thing, shooting for the same target.

Gustaf’s next single will be released before the end of the year. Watch this space for more.