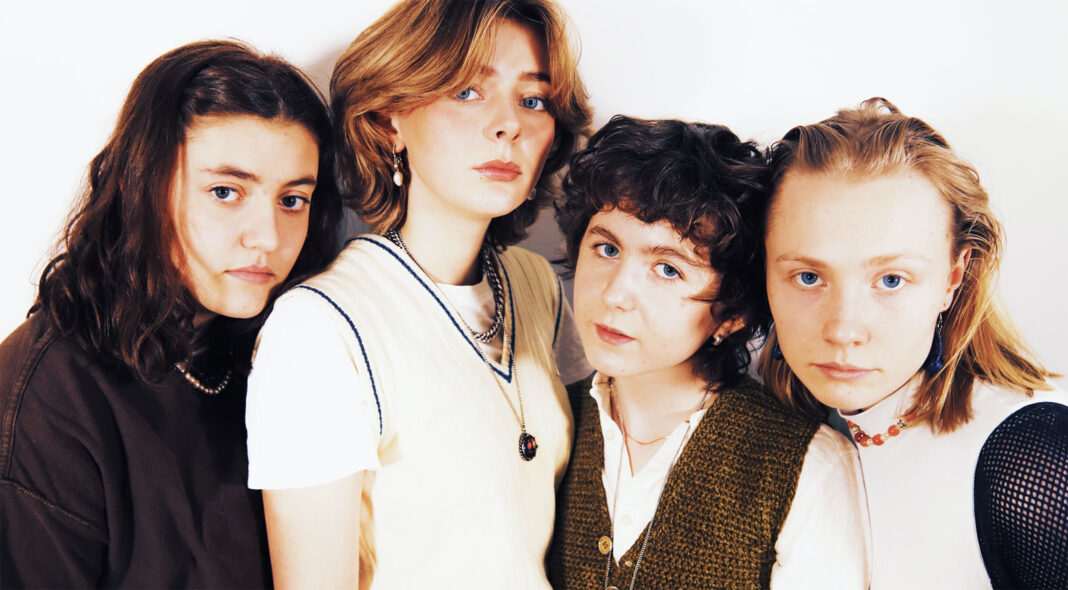 Hi VEPS! How are you today

Tell us a fact about each of you:

Fun fact! June (bass) grows plants in her bedroom. Helena (keys/vocals) reads an extreme amount of books. Maja (drums) had never touched a drumset before joining Veps. Laura (guitar/vocals) had a cello-phase a couple of years ago that gave her pretty bad tendonitis.

You’ve been making music together for a while now. What can you remember about your first ever session as a band?

We were 14 on our first ever session and didn’t really know each other that well yet. It was slightly awkward, but we were very hopeful. We could feel that this was the start of something new and good.

What was the point when you thought – “Hey! We’re really good! Maybe we’ll do this band thing for real’“

I think it was when we were recording our first single ‘Do I Hear a Maybe?’ in 2019. We had only ever listened to our music from practice or at concerts, and listening to it in a new way made us realise that ‘hey, this is actually kinda good?’. It gave us a new perspective on our music, and the feedback we were given after we released it was really reassuring.

Your song ‘Ecstasy’ is about hook-up culture and non-committal guys. Is that based on personal experience? What can you do about people like that?

The song is not so much a social commentary but more of a song about personal feelings of jealousy and frustration told through the lens of someone who is longing after a guy who can’t commit. It’s difficult when two people who are fond of each other aren’t ready to meet each other in the middle. It’s okay to not be ready to commit, just don’t be a jerk about it. In fact, some of us in the band are commitment-phobes ourselves so it’s kind of ironic.

Tell us about the process of making your first ever EP. What do you want it to say about VEPS to the world?

All of the songs on our EP are a love letter to our teenage years. It consists of songs we have written since we were 14, that capture our first loves, first heartbreaks, etc. It’s a coming-of-age record, but as we’re still young and growing, maybe we can say that it’s more like coming of age in real-time? We want it to both be fun and serious at the same time, we want people to find meaning and see themselves in our songs.

We love that you direct your videos. Where do you draw inspiration from?

Our videos are pretty improvised and a lot of elements are made up as we go along. We usually sit down and discuss a concept together that fits with the theme or the feel of the song, and then when we film and edit it some new element always comes up and it makes the videos more unique. So it’s the whole process of making it that inspires us really.

As young women playing guitar music, have you struggled with sexist attitudes? Do people take you seriously?

A bit of both. We have gotten a lot of support, especially from other women in the industry. But we have to admit we find it annoying when people only label us as a “girl-band” or “female band”. We get a lot of gender-related questions in interviews too and it just comes to show how uneven the gender distribution is in this industry, and we hope we can contribute to inspiring other women to play in bands and people, in general, to listen to more guitar-music made by women. We’re just a band that happens to consist of women. And we’re proud of that, but gender shouldn’t really matter as long as the music is good.

What’s the best thing about being a band in Oslo?

Oslo isn’t very big, but there’s a pretty good indie scene here, and several cool festivals and venues to play at. There are also organisations that help give support and set up concerts to meet others, and just in general a supportive view towards musicians and creatives.

Tell us something we should definitely do if we went to Oslo – something the guidebooks might have missed.

Don’t do all the super touristy stuff, or spend too much time at the city centre. Explore our parks, all our different neighbourhoods and areas and venues. There are many places with a lot of charm once you find them.

What’s the thing that made you laugh the most lately?

With lockdown finally being mostly over we are very happy to be able to share a laugh with our friends again!

VEPS are a four-piece band who’s ready to take over the world!