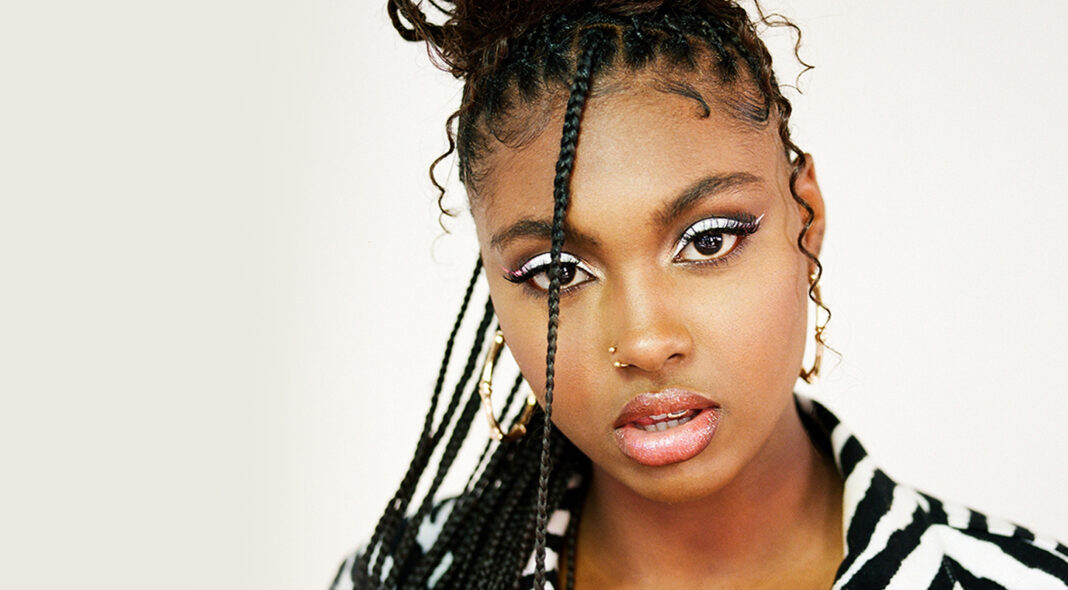 “I’m really only just processing it”, Tiana Major9 exhales, a surprising response to being asked about how she’d celebrated receiving nominations from both the MOBOs and the Grammys this week. The East London native still seems in disbelief, as if recent events were merely a figment of her imagination. “It’s a mad ting. It’s crazy!” Though humble, the 24-year-old has had a stellar year, her unfiltered, authentic approach to music making her one of the UK’s most exciting R&B prospects.

As a young girl raised in Newham, London, Tiana had a “very sheltered upbringing”. Things were simple for her as a child, “literally everything was centred around home, school, church and after school club. That was my life!” Growing up in a Jamaican household exposed Tiana to gospel, reggae, soul, jazz and R&B, with her love for music becoming a viable career option once she discovered her singing and songwriting talents.

But she admits that she was clueless at first, “I didn’t know where to start. I was emailing people, asking to get on performance line-ups, pretending to be my own manager. They all aired me!” Eventually, one person replied, and it was a snowball effect. After jumping on the East London musical circuit, Tiana was finally doing what she’d dreamed of doing as a child: performing.

But even when she was booked and busy, stress was still looming, “It felt long at times”. For a while, Tiana was garnering a strong fanbase through live performances, but didn’t have any music released, “I was just doing a lot of covers or acoustic renditions of unreleased music”. In a world where music oversaturation is now the norm, Tiana’s strategy sounds counterintuitive. “I was fully aware of the fact that I was performing these songs and people couldn’t go back to listen. I didn’t want people to forget me.”

It was the advice from her manager that encouraged Tiana to focus on working on her craft and building her audience. To say that it has paid off is an understatement – since 2019, she’s transcended into an international success. Not only is she signed to Motown, but she’s also collaborated with the likes of EARTHGANG and Stormzy (she features on ‘Heavy is the Head’ track, ‘Rainfall’) and released two acclaimed EPs. With music that blurs the lines between R&B, jazz, neo-soul and reggae, Tiana has carved out a sound for herself that is future-facing yet laced with hints of nostalgia.

But Tiana points out that her journey to getting signed wasn’t smooth. “I was doing the rounds, going to all the labels and meeting people, having conversations. But in the end, in the UK, it just fizzled out, it didn’t go anywhere”. Her frustration apparent, she continues, “They were promising things, then they’d just stop replying. That was disheartening.”

Unfortunately, Tiana’s story isn’t a unique case. Artists such as Ella Mai, Little Simz and Bree Runway have found more success internationally than on their home turf. Even Ray BLK has been vocal on the fact that record labels don’t see black artists who lie outside UK grime and drill as worthwhile investments. Tiana reiterates this: “We see artists outside these genres with large fanbases, labels just need to notice them.”

Despite this, Tiana isn’t one to focus on the negatives, what matters is dropping music that’s genuine, pure and unfiltered. In her most recent EP ‘At Sixes and Sevens’, she’s done exactly that. Narratively, Tiana embraces the aimlessness that defined her early twenties, “when I was writing the project, I was confused about my life’s direction, how I should be loving people, and how I should be loving myself”.

This release showcases Tiana’s range as an artist – whereas her debut EP ‘Rehearsal @ NINE’ sticks to a jazz and R&B fusion, this project shows Tiana pushing herself and experimenting as an artist. From the reggae-infused ‘Think about You’, to the soulful guitar embellishments in ‘Lucky’, Tiana opens herself to the genres that shaped her upbringing.

“‘At Sixes and Sevens’ is me being more personal and open with myself”, Tiana continues.

This brutal honesty shines in tracks like ‘Exclusively’, a blunt, frank confession of her devotion, layered over glistening keys. Or the groovy ‘Real Affair’, which despite its swelling instrumentation, actually has a bleaker message. “It’s about being in a toxic relationship that you don’t want to leave and feeling conflicted because of it”.

In this track and others, Tiana candidly outlines her experiences navigating queer relationships. Giggling, she tells me that she approaches her sexuality in her music in the same way she approaches it in life, “it’s not a thing that I feel like I need to hide! I don’t need to a big ‘coming out’ thing. I’m just living my life.”

This unapologetic approach is inspiring Black queer women around the world. Of course, for some, coming out is a key part of reclaiming one’s queer identity. Yet it isn’t necessary, and shouldn’t be expected, explains Tiana. “Straight people don’t need to come out, so why do I?” she says. It’s true. “I don’t want people to make it the biggest thing about me. I don’t want one thing to define me.”

Tiana hopes that, in the future, her authentic lyricism and musicality continues to be welcomed, and that she’ll be given space to keep pushing the boundaries of genre, “I want to explore rock as a genre soon, and I want to go deeper into jazz.” Or, maybe she’ll delve more into songwriting? Laughing, she says, “Yeah I might write more songs… I want to write a song for a K-Pop artist – that’s where the money is right?”

Listen to ‘At Sixes and Sevens’ by Tiana Major9.