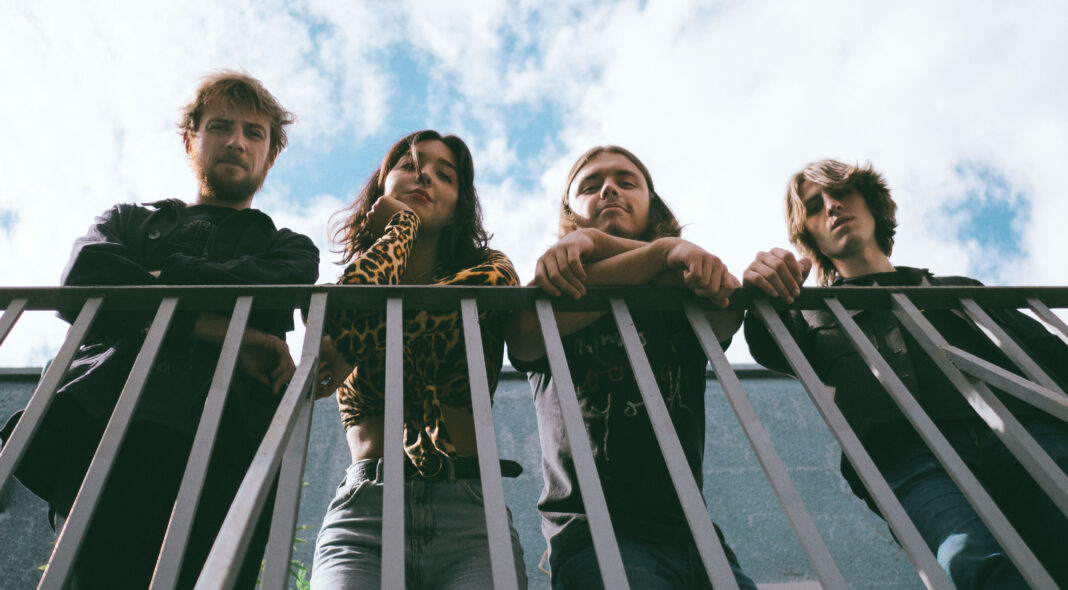 Over the past few years, Liverpool rockers The Mysterines have been perfecting their brand of riff-happy, groove-based indie belters, complete with a heavy dollop of punk attitude. They tick all the boxes for a successful rising act: they’ve previously toured with the likes of Miles Kane and Royal Blood, have steadily become BBC Radio 6 A-List favourites, and their ace debut EP, 2019’s ‘Take Control’, has surpassed a million streams.

We caught up with Lia Metcalfe and Callum Thompson from the band to chat about exciting debut album plans, the impact of growing up in a music city, and their latest single, the bolshy, horror-infused ‘I Win Every Time’.

You grew up in Liverpool, a music city. How has that influenced the music you are making now?

C: There’s a constant flow of young bands doing well from Liverpool. I think going and watching so many gigs has been a massive help, and racking up knowledge of other bands’ stage presence and what they do to work up a crowd. That’s just as good as writing loads or playing loads yourself – watching other people do good stuff, too.

L: That’s always been the way forward for us, going to as many gigs as possible throughout the week.

Why do you think Liverpool has got such an appetite for music?

L: In most Northern cities you find a lot of inspiration and creativity. [We] talked about this other day, actually, the whole struggle for survival, in counties that are predominantly working class. Creativity here feels more like an integral part of life here.

C: I think it’s a crazy, creative city. There’s a lot of opportunities for creatives, you have got loads of cool art galleries, a fair few music venues and quite a big film scene. I think that there’s just something about us Scousers – we seem to want to get up and do things, and ask a little more of ourselves. I think the opportunities that this city has given us probably has a big part to play in our success to be honest.

Where have you been finding inspiration during lockdown?

C: I think we find a lot of inspiration in other art forms. We read a lot of English literature, and watch plenty of films. We both feel creative when we’re feeding off other forms of art.

Tell us about your latest single, ’I Win Every Time’.

L: It’s quite ballsy! Ironic, too, and an exaggerated take on a massive ego. You know, like, I actually remember when I wrote that, it was about a feeling that you get from someone you’re always against. There’s no way you can win because that person wins all the time.

Your previous singles – particularly ‘Love’s Not Enough’ – have been received really well, and have had great airplay. Has this added to the pressure of releasing new material?

L: I think maybe because Love’s Not Enough and Take Control are both quite melodic, people were drawn to them. There is a pressure in terms of constantly feeling the need to write new stuff, but we’re just gonna do what we want to do anyway, regardless of whether people like it.

How has your songwriting developed since you started out? Do you all take part in the process?

C: I’ve not long been in the band, only eight months or so. I’ve always been the main songwriter in all the projects that I’ve been a part of, but me and Lia work together now – it’s like having two people proofread an essay.

L: We have very similar aspirations, and a very clear image of what we want the debut album to look like.

How do you feel about not being able to play live for the foreseeable future?

L: If I’m honest, I don’t really like gigging that much, but the last tour that we did, which was in February, I really enjoyed. I think we’re just gonna have to not focus on the harsh reality that we’re not able to gig for a while and hopefully just prepare for shows that’ll take place next year. We’re still trying our best to keep busy, but it is obviously annoying. We had some really good festivals booked and some really cool gigs lined up. But, you know, there’s plenty of other things to do – artists are gonna bounce back from lockdown with lots of new material and not want to play the old stuff!

C: We’ve written so much material, and have a lot of the new ideas that we definitely wouldn’t have been able to have the time to nurture if we had been gigging instead over the past few months.

Do you have any particular goals that you want to achieve with the release of your debut album?

L: Loads of money… loads of new guitars! No, I’m joking. We’ve all done what we can to make it the best it can be, so we can’t wait to just go out and get bladdered… that’s the real goal.

C: We want just all want to be able to listen back to the album and think, ‘That’s fucking boss!’. I think it’s just gonna be dead cool. I can’t wait to hold a physical copy – just having it there in our hands will be a big accomplishment in itself. There is no desire to sell out Wembley just yet, we just want to be able to sustain what we’re doing at the moment.