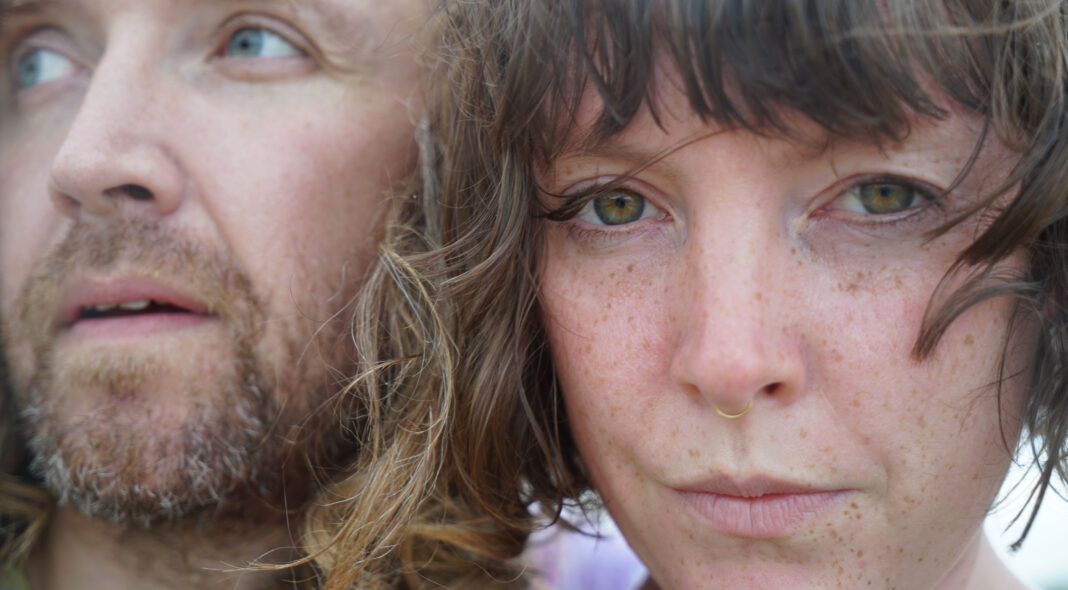 This summer Amelia Meath – the lyric-writing, Buffalo boot wearing, cartwheeling half of Sylvan Esso – turned 32. Of course a party was impossible, so instead she and her bandmate and husband Nick Sanborn got masked up, dipped themselves into a vat of hand sanitiser and went to a wind chime shop. “It was very exciting because I’ve never gotten a wind chime before,” she chuckles from their pair’s front porch in Durham, North Carolina. “Would you like to hear it?”

Meath flicks the chime and a flutter of bright, ringing noises peal down the line. It’s rather lovely. “I don’t know if this is particular to the one store that we went to, but they were all linked to the sounds of the planet. So this one is the sound of the eclipse.”

As well as purchasing intergalactic sonic home decor, Amelia has spent the peculiar past few months nailing the black dahl recipe from the Dishoom cookbook (“I got it shipped because it’s sold out in the States and I’ve been slowly working my way through it”) and finishing up the third Sylvan Esso album, ‘Free Love’ – which she calls “our best that we’ve made so far” – as well as building a very special recording studio out on 10.5 isolated acres in the middle of the woods. As lockdowns go, it could have been worse.

Durham isn’t what you’d call a massive city to start with, but drive out of town and things get real rural, real quick. The perfect place then to set up a proper home for Sylvan Esso’s unique and heartfelt take on electronic music, which, since the release of 2013’s undulating ‘Hey Mami’, has made us want to hug our mates – and possibly shed a couple of small, damp tears – just as much as it’s made us want to thrash about wildly on the nearest dancefloor.

But rather than some quaint cabin – which you might expect considering Amelia has been a member of the rootsy, Appalachian singing trio, Mountain Man, for the past decade  – Sylvan Esso’s finally finished new studio is far more future-facing. “It’s matte black and looks like a pretty wild modern monolith,” explains Amelia. It was still being finished when ‘Free Love’ was being made, but that didn’t stop them from working on the record, instead they simply shifted production into the studio’s smaller room. “People were working on the A room for the whole time – so there are a lot of saws on the new record!”

The main room is now done and dusted and as well as providing a space for future Sylvan Esso albums to take shape – as well as other local musicians – it also features a space where Amelia can indulge her passion for dancing. If you’ve ever seen the duo play live, you’ll know that her kicks, jumps and twists are as much a part of the performance as her soulful vocals and Nick’s intensely focused way with various mixers and modulators. “The A room can function as a big live room but we designed it so that whoever’s sitting at the desk, there’s 25 feet behind them that’s beautiful, concrete floors, so anyone can dance back there…”

You’ll notice Amelia doesn’t just dance her way through every Sylvan Esso song – vocally as well as physically – but that many songs are also about the act itself. “I think that’s because it’s a really easy way to talk about somebody who’s fully physically invested in something,” she explains of her obsession with movement. “I think there’s a reason why humanity naturally wants to dance at either at clubs or at weddings – because there are so few tasks that require the entirety of your being. Also it’s about community and joy – you can feel all sorts of things while you’re dancing. When you’re dancing you’re looking around and you’re also like feeling what you’re feeling and that’s kind of all you can do when you’re dancing, you can’t multitask so much.”

However, Amelia’s obsession has caused a few fractious moments between her and Nick. Their recording sessions have always been peppered with tiny arguments, but the one that comes up most often is when Nick asks if she’s really writing another song about dancing. The answer is always yes, including ‘Free Love’’s pared-back, softly romantic ‘Rooftop Dancing’, a tribute to, well, dancing on a rooftop with a lover. “We will probably always keep on having that fight,” laughs Amelia. “But whatever – he doesn’t write the lyrics!”

As well as a dancefloor, Sylvan Esso’s new studio also plays host to Amelia’s collection of lavish stagewear. “That’s one of the one of the more whimsical and silly parts – a closet where all my costumes live. It’s full of giant Buffalo shoes,” she reveals, before estimating that she has approximately 25 pairs of the chunky platform trainers made famous by the Spice Girls and which she is never seen onstage without. “One pair is covered in Smarties and I have them in roses and all different colours of glitter.” It’s also where she stores the outfit she wore at the end of last year when Sylvan Esso played a run of exclusive dates with the 10-piece WITH band. A collection of friends including Wye Oak’s Jenn Wasner, Hand Habits’ Meg Duffy, Molly Sarle and Alexandra Sauser-Monnig of Mountain Man and Matt McCaughan of Bon Iver and Hiss Golden Messenger, the band reinterpreted Sylvan Esso’s back catalogue for symphony halls; lush, bold and bigger than ever. Amelia marked the occasion by dressing in a huge pouffy pink jumpsuit, which she wanted to make her look like a “sexy Michelin Man.”

At the start of lockdown a documentary about the tour was released on YouTube, showing the collaborative rehearsal sessions ahead of the shows as well as the performance itself. “The coolest part that WITH really gave us was that it felt like in the past we were really protective of what Sylvan Esso the band was – Nick and I playing together – but WITH blew open an amazing door, so it can be any arrangement of people as long as Nick and I are there.”

Sylvan Esso have long been highly collaborative, joining friends Bon Iver on stage at Bonnaroo in 2018 and more recently working with Real Estate and Local Natives. They’ve even been called in to write at big superstar pop sessions. But as yet, a Beyoncé-sung banger evades them. “So much of that stuff is so like… spotty. You go into a session and you’re writing for like three different people maybe and then you do your thing and then hopefully everybody gets it and decides. We’ve only done it a couple times but it’s really fun.”

Pop music has long had a special place in Amelia’s heart. She adores Lady Gaga and Taylor Swift (though isn’t quite convinced by ‘Exile’, Swift’s recent collab with their pal Justin Vernon. “I love them both and I think they’re both incredibly talented, but with that song there’s like an element of performative love in there that I just don’t buy!”) but that’s not to say the tag isn’t without its difficulties. On ‘Free Love’ a song called ‘Train’ features the line “pop music made me go insane” and deals with the fickle nature of hit songs. “I wanted to write about how you can love a pop song so dearly for like three weeks and then leave it behind,” she explains of the track, the breakdown of which sees her rattling off a list of former favourites. “As a pop songwriter it’s really nerve wracking to realise that if you really hit it big you’re going to be the flavour of the week for a month tops and then people will move on.”

That said, Sylvan Esso have been wowing fans of hypnotic electro-pop since their self-titled debut album came out in 2014, while 2017’s ‘What Now’ secured them their very first Grammy nomination in the Best Dance/Electronic Album category. Amelia and Nick were mid-way through Australia’s touring festival Laneway, so couldn’t attend the ceremony, but neither could all the other acts on the tour who had been nominated, which made for one hell of a hotel sleepover. “Everybody was together; Father John Misty, The War On Drugs… So we stayed up and watched the Grammys together. It felt really sweet to be in that community of people.” So did you all dress up in your finery? “No,” laughs Amelia. “Everyone was wearing their hotel robes.”

Sylvan Esso might have lost out to Kraftwerk – if you’re gonna lose an award, lose it to Kraftwerk, right? – but going on the strength of ‘Free Love’, we’re thinking Amelia might want to dust down that pink Michelin Man outfit for next year’s bash.

‘Free Love’ by Sylvan Esso is out September 25 on Loma Vista Recordings.