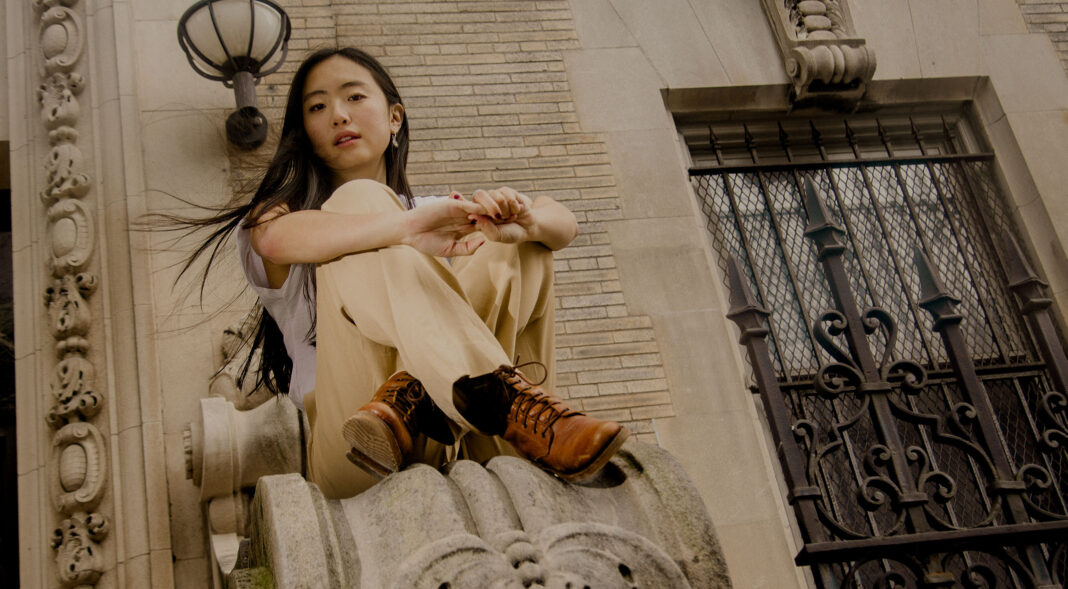 “My phone was buzzing uncontrollably. I kid you not, if I had left it on a table, it would have fallen off.”

Like bolts of lightning, you’re never quite sure when or where viral success will strike. For 20-year-old Sarah Kinsley, it started as a terrible day; alone in her apartment, channelling frustration into music production and sampling sounds around her house: a knock on the door, a clink of a wine glass, an almighty thump on her sofa. She gave the recording an ironic title – ‘Women Don’t Produce Music’ – uploaded it to TikTok, and for two hours, thought nothing of it: “Wow, I just spent an hour doing this worthless thing on the internet. What am I doing with my life?”

Then it caught fire: millions of views, thousands of comments, and even a message from Diplo. The multi-instrumentalist – who balances her blossoming music career with her studies as a Music Major at Columbia University – suddenly had scores of people invested in her music. “It was way too much for my ego!” she laughs.

“Some people take TikTok really seriously but I’m not sure how to measure my idea of success based on that. It’s hard to come back down and realise that this means nothing, really, in terms of relationships and connecting with people. But if I had the key to TikTok, I would totally let you in on it!”

In an age where producers at any age can access the sonic equivalent of the Library of Alexandria from the comfort of their bedroom, Kinsley found renewed pleasure in sampling organic sounds: “I got obsessed with the fact that no one else could make that sound. You can hit your table or you could hit my table, but the way that you hit it isn’t the same. This sound is completely mine.”

Hitting a table is a deceptively simple way of describing Sarah Kinsley’s music, when she produces polyrhythmic tapestries driven by feeling, with lush textures that gently unfurl. There are clear influences and comparisons – a Fleetwood Mac-style drum fill opens ‘Karma’ and ‘Over + Under’ swoons among synth beds like Maggie Rogers, with the raw vocal power of Sharon Van Etten – but Kinsley manipulates sound to the point where it’s completely hers; in one instance, sampling her voice until it glides just like a violin. Her new EP, ‘The King’, doesn’t stick to one style but the songs remain connected through subtle threads, with a stadium-ready heart on their sleeve.

It’s where the rigour of classical music and theory meets an unabashed love of pop music. Raised on her parents’ U2 and Abba cassettes, Taylor Swift, and the odd Hannah Montana CD – “I honestly think a lot of indie-pop has taken inspiration from those!” – Kinsley used her classical piano training to compose huge orchestral pieces, alongside an occasional Natasha Bedingfield cover. There were years of “failing miserably”, enduring hours of “incredibly boring music theory” but it only made her fall harder: “Having so much passion to love and hate certain parts of something, drew me to it even more.”

Kinsley doesn’t hide this passion out of false modesty. Using TikTok as her virtual venue, she dances to her latest tracks, imbued with an infectious and refreshing excitement for her own creation. “I’m glad that it feels refreshing and not so weird to see me going through an out-of-body experience on my phone!” she says in relief. “I get embarrassed when friends watch my videos in front of me but when I made ‘Over + Under’, I just couldn’t stop moving to it – like it was touching different parts of my mind. Why would people release music that they’re not head over heels in love with?!”

This wonder and gentle exuberance also shine through in her love of period dramas, especially 2005’s Pride and Prejudice and Greta Gerwig’s Little Women, which inspired her desire to compose film music one day: “Those scenes where they’re wearing long styles of clothing and running through fields, thinking “this love is so dramatic!” Kinsley says, exclaiming with her hands when words aren’t enough. “I’m not confident enough to be like, “I think we should just mute that and put my music over it” but God, it would be a dream. Those movies fill a place in my heart that nothing else can.”

The sweeping period pieces share the same sensibility as Kinsley’s music, intricate narratives vigorously yearning for something in the “oceans of endless possibility”. Just like these particular sentiments only communicated via film, Kinsley has feelings that can only be expressed through music: “I was writing this song where I was mad at someone and jealous that they could live such an easy life, while I was stuck with all the hurt they’d given me. I talked about it with people but I didn’t feel like that conversation was really done until it became music,” she says. “Until it was expressed as something independent from me.”

Sarah Kinsley’s EP ‘The King’ is out Friday 4 June.

333 Wreckords: meet the collective bringing POC to the front of rock