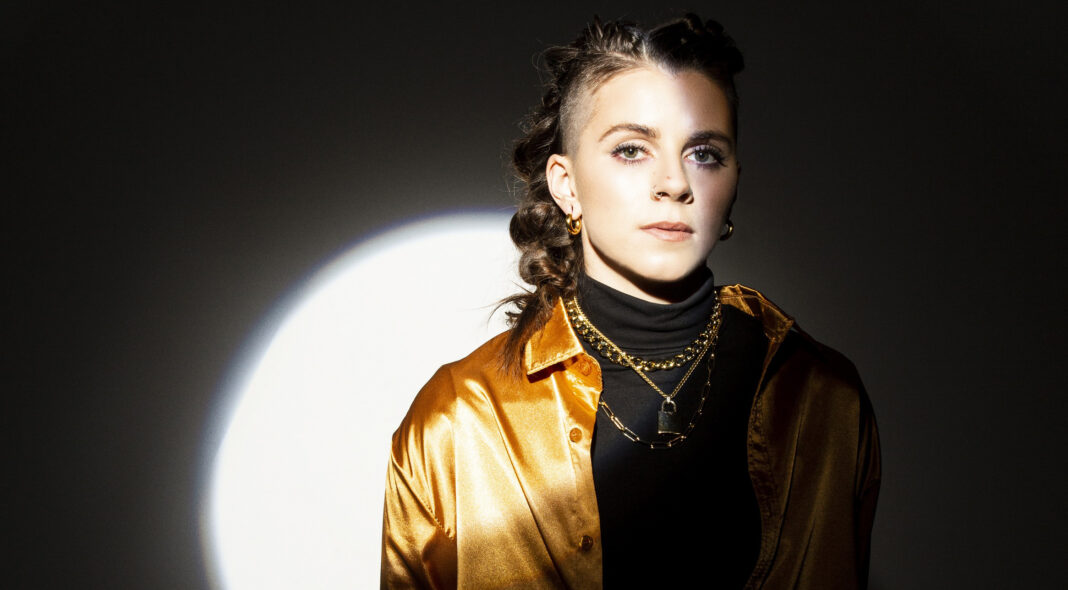 Known for their gritty blend of dark synth rock and brooding lyrics, Pvris have a signature sound you can recognise almost anywhere. Littered with paranormal references and intricately metaphysical lyrics, the Massachusetts band have chiselled away at their sound to create their own niche of sad alt-goth pop. Chalking her alternative influences down to reading skeleton books as a child and living a short distance from witchy haven, Salem, spirituality is something Lynn Gunn has always found fascinating. “In this last album, especially in the visuals, those themes are much more prevalent, but it still feels a little hidden, unless you’re in the know about certain things. I always want my art to match where I’m at in my life, so it feels right,” she says trailing off, pausing, and then picking up her line of thought again.

“[Previous albums] ‘White Noise’ and ‘All We Know Is Heaven’ came from a real place, but I think I was afraid to be straight up about what I wanted to say. I would mask a lot of things in metaphor or some type of visual theme, and that still exists a little bit on this album. I really wanted to try and speak a bit more clearly and straight forward on this album.”

When it comes to art, Lynn has always held a unique relationship with the work she creates: “It’s scary to be in a good headspace because there’s a misconception that we need to be miserable to make great art and I really don’t believe that,” she confesses, “I used to believe it’s the cross you have to bear as an artist , but it’s really not true. You can still make really great art when you’re taking care of yourself. I’m just grateful to realise that and take the time and steps to do that.”

After delaying the album in respect for the Black Lives Matter movement, is Lynn looking forward to ‘Use Me’ finally being out in the world? “I’m super excited! It’s been so long since we put anything out and, for me, this is where I’ve wanted things to sound as far as production and song writing goes,” she says smiling, “It feels really good to say this is the next step of Pvris and hopefully the world enjoys it, but if they don’t it’s okay, it was a blast to make.”

Taking the right amount time to release the new record was important to Lynn. She wanted to use her platform to make space for a wider cultural conversation but admits not always easy to confront politics. “I have been thinking about that a lot recently. I get a little worried with it sometimes and I don’t know if that’s necessarily the right thing to feel,” she explains. That said, she will always do her best not to be limited: “I will talk about my sexuality, but I never want it to pull away from the artistry,” she outlines. “If there’s any type of visibility, I want somebody who might be trying to figure out their identity and can look to look to Pvris and say like “I didn’t realise you can be that and do what I’m doing”.

Using Pvris as a platform to empower fans is naturally inspiring, but this time, Lynn confesses to the music bringing her own sense of liberation: “Being able to create ‘Use Me’ with [US musician and producer] JT Daly was really empowering. I felt nurtured as an artist and a multi-instrumentalist. JT was the first person that ever let me track drums or play bass on something,” she explains. “I was able to be involved in the production but was also pushed in the right directions, whether it was trying to find a better melody or rethinking lyrics. It felt very empowering and very supportive. It was great.”

When it comes to art, Lynn has always held a unique relationship with the work she creates: “It’s funny – it’s kinda scary to be in a good headspace. There’s a misconception that we need to be miserable to make great art and I really don’t believe that,” she confesses, “I used to believe it’s the cross you have to bear as an artist, but it’s really not true. You can still make really great art when you’re taking care of yourself. I’m just grateful to realise that and take the time and steps to do that.”

Even though ‘Use Me’ is on the way, it hasn’t stopped Lynn from already thinking about what’s next. While she can’t share too many details, she lets us in on a few secrets. “We’re already working on new things that I’m really excited about. Who knows, we might have something shortly follow the album. I would love to do a few EPs after ‘Use Me’ and try new stuff out.” If a new EP sounds half as good as ‘Use Me’, then this time next year, we could be looking at Pvris world domination. Watch this space.

‘Use Me’ is out August 28 on Warner Records