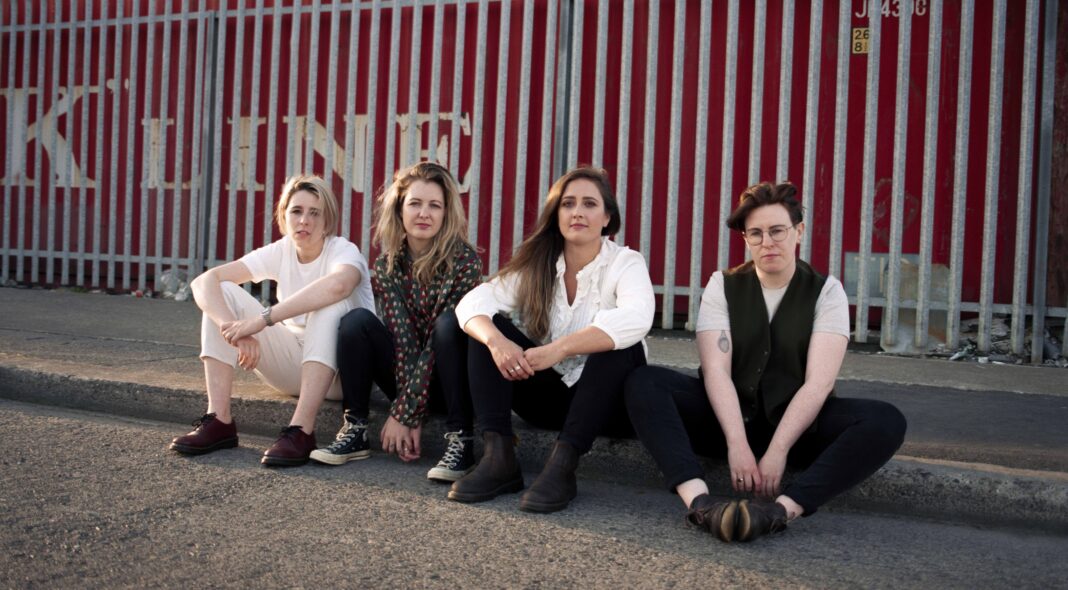 When it comes to music, Pillow Queens don’t like labels. “If you were to ask us like us ‘what genre are you?’ we wouldn’t know. We like that we’re able to change and make music as we go. If people put a label on it, that’s fine, but it’s certainly not something that constricts us,” guitarist, Pamela Connolly explains, over Zoom.

Lead vocalist Sarah Corcoran elaborates: “It’s funny, I was recently asked a similar question but in terms of my sexuality and where I fit in the LGBTQ+ community. I haven’t thought about it in years. It’s never been something that I’ve needed to kind of say or justify – and that feels the same for genres,” she says. “It’s less about the kind of music we play, but the audiences we play to. It’s more about our network than genre. Instead of it being: ‘have you heard this sound?’, it’s more of a ‘I think you’d like this band because they align with your values’.”

Values and similarities are what pulled this group together. The Dublin band’s shared experiences of growing up in Ireland feed heavily into their music. “When we finished making the album, we picked up that one of the themes running through it was religion and that sense of growing up in a religious society,” Sarah acknowledges.

“When we formed, Ireland was in a bubbling hot pot of political energy. The marriage referendum had just passed and while the referendum to repeal the illegality of abortion was on-going. We were also coming out of recession at the time,” Pamela explains. “While these aren’t things we actively speak about in our music, they are definitely circumstances which bleed into our lyrics.”

Moving from hometown politics to a longing for home, the band have put their nostalgia front and centre in their latest single ‘Handsome Wife’. “It’s funny,” says Pamela, “The song was inspired by coming home from tour and looking at the world in a very romanticised way. It kind of became a little bit of an anthem in championing a way of life which may not be this cookie cutter image of what your life should be.”

“I love that Pamela called it an anthem,” Sarah interjects, “It’s been out for like three weeks!

“I remember the first time we decided to debut the song… in big Dublin crowds, you can always find pockets of queerness everywhere you go, but in a huge mainstream crowd, you’re outside of that queer realm that you’re used to. So it felt really nice to be playing this queer anthem and have people react to the song.”

With the band’s debut album, ‘In Waiting’ on the way, have the nerves taken over?

“I’m terrified!” Sarah laughs, “It’s coming out in September and this is our first piece of work that’s really thought out. We’re happy to stand behind it as our first album so it’s this huge deal for us.”

Pamela is feeling quietly confident about the body of work they’ve pulled together. “If we had put it out earlier in our career, it probably wouldn’t sound the same at all. When we were releasing ‘Gay girls’ or ‘Brothers’, we had found the sound we wanted. Before that, it was a little bit inconsistent because we’re still growing as a band, so it’s nice to release this as our sound in one package.”

As the band is making big moves, we ask how they’re feeling about the future. “I’m very optimistic which maybe is not the best quality as a musician, because sometimes it doesn’t happen. Sometimes a global pandemic happens when you’re meant to play South by Southwest!” she says of the band’s cancelled appearance at the Austin festival, “But I’m really confident in what we did with this album and if all things go in our favour, there’s no reason that we can’t be worldwide superstars!”

Pillow Queens debut album ‘In Waiting’ is out on September 25 2020.