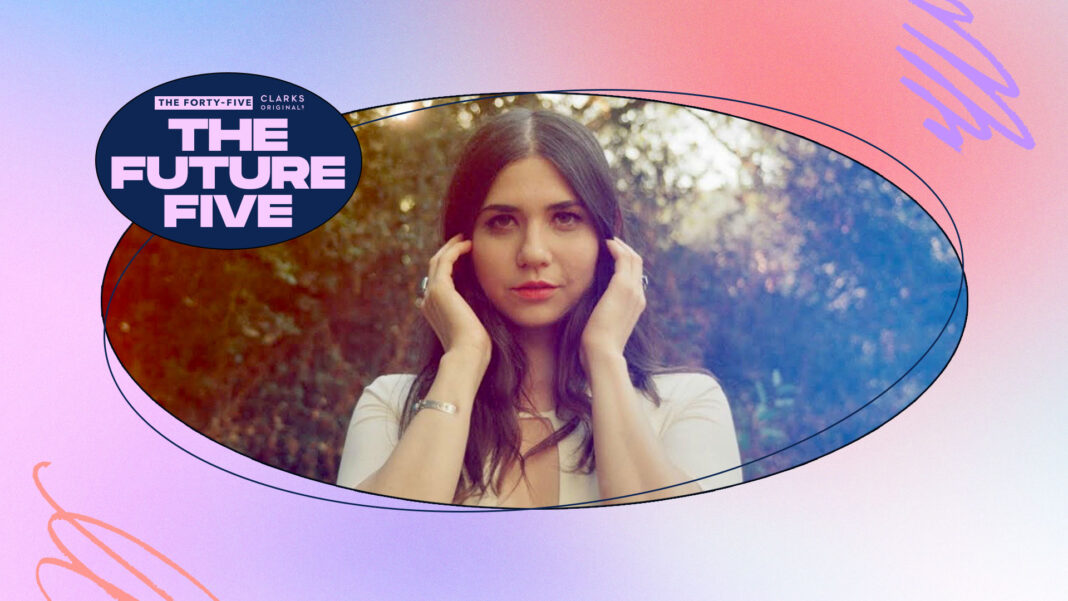 Pearl Charles could be from another time. The singer/songwriter is about to release new album, ‘Magic Mirror’ – a country-tinged LP that wouldn’t sound out of place in a jukebox filled with Carole King, ABBA and The Mamas & The Papas. But despite her retro, Laurel-Canyon vibe, Charles’ dreamy vocals – which tell stories of late nights, mushroom trips and one-night stands – offset to cosmic synths and seventies riffs, are just, well, extremely joyful. And right now, isn’t that what we all desperately need?

We loved her upcoming album so much, we’ve included her in The Future Five – five artists you can’t afford to miss in 2021.

Hi Pearl! You’re part of The Future Five. Are you excited about the year ahead?

Well, first of all, thank you for including me! I’m really looking forward to 2021 and hope we’ll be able to get back on the road, though that may still be wishful thinking! No matter what though, we will keep making and releasing music, so I am very excited about that!

Tell us about how you started making music

I was four years old when my older sister started piano lessons and I begged my parents to let me take lessons too. They told me if I still wanted to when I turned five they would let me, and the rest is history! From there I got really into musical theatre and started voice and guitar lessons as well. Eventually I sort of diverted off the path of musical theatre (I got in trouble for smoking pot at a classmate’s house whose father was a famous country singer/songwriter, but that’s a long story for another time!) and went more into the world of rock’n’roll and playing in bands which I do think is where I was meant to be.

We’re getting some serious ABBA/Fleetwood Mac vibes from your music. What did you listen to growing up?

Though I definitely heard those bands when I was growing up, I didn’t actually really get into Fleetwood Mac or ABBA until I was in my 20s. My introduction to those bands were mostly just as oldies radio hits, so it wasn’t until I got more deeply into discovering and making music myself that I was able to appreciate the level of musicianship and songwriting both those bands exhibit. Growing up I listened to a lot of classic country and singer/songwriters as well as classic rock bands because that’s what my parents exposed me to. The Beatles, Bob Dylan, Leonard Cohen, John Prine and Hank Williams are some of the quintessential ones that come to mind. I remember the first CD I bought for myself was Eagles Greatest Hits.

Your songs have a really great story to them. Are they autobiographical?

Most of my songs are basically autobiographical or at least start out that way. I used to write a lot more about what happened to me, whereas lately I like to turn inward and look to what’s going on inside of me and how I feel to find inspiration on what to write about. Sometimes I’ve also noticed that life can imitate art. It’s almost as if writing certain songs can call that sort of energy or situation into being or that you’re almost psychically predicting what’s going to happen before it does in song.

Do you write the story/lyrics before the music? Tell us about your process.

Ultimately there is a lot of cosmic intervention that comes with songwriting, so there isn’t one specific process that I rely on. Sometimes songs will come to me fully formed in a dream or while on a psychedelic trip, whereas other times it’s just a lyrical or musical concept on its own. I’m constantly writing down or recording ideas that I use to fill in the blanks or use as a jumping off point when I’m feeling stuck, but I do feel like the best songs sort of just flow out effortlessly.

You’ve talked openly about taking psychedelics. How has that it informed your music? What’s the most profound thing that’s happened to you when high?

Psychedelics have been such a useful tool for me and I was always fascinated by their effects ever since I first discovered them, though it took many years of experimentation to figure out what the best practices were for me. Whether it’s creative or self exploration, mood elevation and stabilisation or just finding and deepening the connection we feel to each other, this planet and the entire universe, there is a different psychedelic for getting in touch with and exploring those different feelings. I’ve had too many amazing psychedelic experiences to count, but one time that really sticks out to me was when I was on acid under the stars in Joshua Tree and I saw what looked to me like an energetic grid connecting all of the stars to each other, and I just felt such an ultimate sense of peace and belonging.

You have an incredible home in Joshua Tree, California. Many artists before you have headed to the desert to record because they feel it has a mystical energy. What has your experience been as a creative in an environment like that?

Joshua Tree is such a magical place! My first experiences going out there were with my family when they bought a really unique house (it was built by the first Native American Playboy Bunny) in the area about 13 years ago. That was the place where I first felt really drawn to revisit the classic country music my mom had shown me when I was young, some of the artists I mentioned earlier and others like Patsy Cline, Loretta Lynn and Merle Haggard. It was only later that I found out about the significance of Gram Parsons and felt that somehow his spirit had guided me in the right direction. There is just this peaceful, calming feeling out there, you truly feel connected to the earth and surrounded by nature, whether it’s the plants, the animals or the stars. It’s those moments where you feel so small in the world, but in the best possible way, that make Joshua Tree an artistic and spiritual Mecca.

In your track, ‘Imposter’, you talk about “looking for yourself”. As someone about to release their new album, is “imposter syndrome” something you worry about?

Definitely. As a woman in the music industry it’s something I struggle with a lot and I know I’m not alone on that. Despite my years of experience and education, self-doubt can always linger. I feel like it’s such an important issue to shed light on because some people may not be aware where those feelings come from and I know it was helpful for me to find that perhaps there was a reason beyond my own shortcomings that I might feel inadequate at times.

If people are just getting to know you, what song should they listen to first?

That’s a really interesting question! I definitely think listening to my most recent singles and the new album will give you the best insight to where I’m at currently as an artist and what’s closest to my heart at the moment. At the same time, I’d love to be able to be judged on the entire breadth of my work, so I think listening to my entire discography would be a very thorough way to get introduced to my music. Though part of me wants to say to listen from most recent to furthest back because I’m most excited and proud of my newest work, I think listening chronologically would probably also be insightful as to my progression.

And what is one thing you’d like them to know about you?

There’s a lot of celebrity for celebrities sake in today’s world. I’m most passionate about my music and I’d like to be most well known for my musical contributions, so I’d love for people to get to know these songs and I’d be very grateful if they did.

The Future Five was created in association with Clarks Originals.