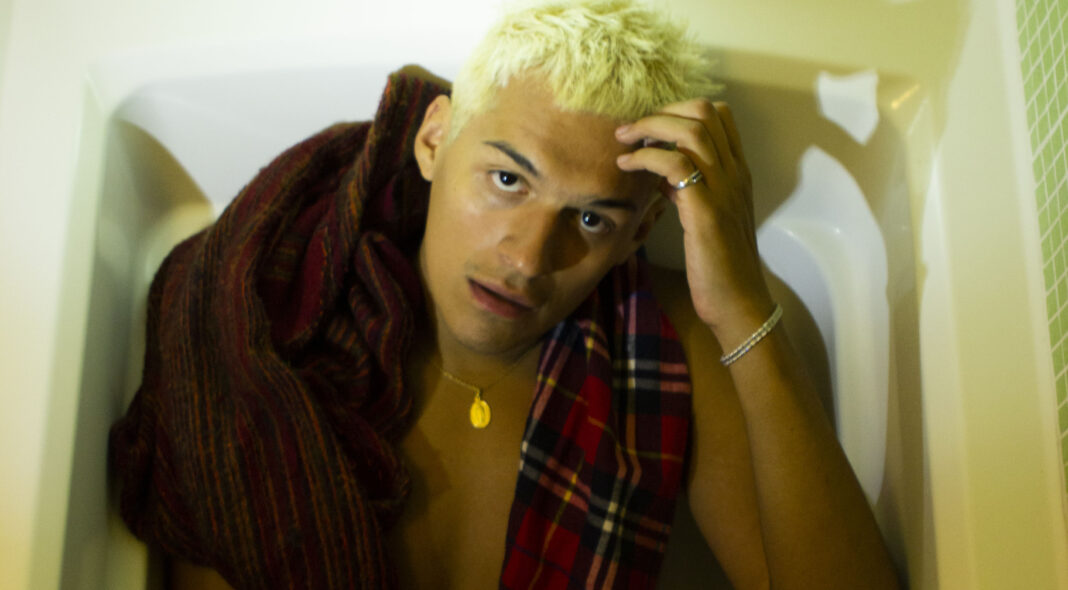 Omar Apollo has the musical taste of a much older person—Prince, Bowie, Stevie Wonder, Sly and the Family Stone. So it is no surprise that after a brief Twitter exchange with Bootsy Collins, the 23-year old singer-songwriter got the funkadelic legend to remix his heartbreak anthem, ‘Stayback’ into a track that is so gloriously steeped in 70s retro that it ends up wholly modern.

Apollo, born Omar Velasco, is a first generation Mexican-American who grew up in South Haven, Indiana population 5,278—or rather 5,277 since Omar packed up and headed west to Los Angeles. Apollo had always loved music. He danced, sang, played guitar, and made beats in his spare time, and eventually started uploading music to SoundCloud, racking up listens. His breakout hit came in 2017, after a friend sent him the $30 necessary to upload his smouldering and soulful blues song ‘Ugotme’ to Spotify, where it made a splash. He released his debut EP, ‘Stereo’, in 2018 and its follow-up ‘Friends’ the following year. Like many young, talented people before him, soon enough Omar was following his dreams moving to La la land, but scarcely living there as he toured the world spreading his musical gospel.

As the pandemic scuttled his perpetual world tour, Omar locked down at home in his new city and put the downtime to good use. He tapped into his seemingly boundless creative energy to craft a new slate of songs that pay homage to his musical ancestors, blending soulful psychedelia, Mexican corridas, Dembow, 90s R&B, and mid-80s Prince and the Revolution funk as well as a splash of Lil Uzi Vert and Frank Ocean for extra flavour with lyrics sung in English and Spanish and plucked from his own experiences. Now, after two well-received EPs and a handful of loose singles, he is on the brink of putting out a longer collection—not quite an album, but closer than he has been before. “I don’t want to put out a full length until I can tour afterwards,” he explains, from his home in Los Angeles.

We caught up with Omar, lying horizontally on a couch, recovering from jet-lag from a trip home to Indiana.

How did the Bootsy Collins collaboration come about?

I made ‘Stayback’ right after I went on a bike ride listening to [Bootsy Collins track] ‘Munchies for Your Love.’ Then, I went to sleep and woke up the next morning feeling this whole Outkast-Prince-Bootsy vibe and wrote the line [* sings*], “You know I been feeling you since way back”. And then I finished it and was like, man, it’d be so crazy if I got Bootsy on it. So I just sent him a heart or something [on social media] and then he sent me back a heart and I was like, and then I said, like, ‘appreciate you!’ or whatever. And then I asked my label if they could get him on a song. So they sent him the song and he sent it back, like a week later. Literally, it was so fast.

Did you get a chance to talk with him?

Yeah, he was just down. We talked on the phone and he was super cool. He gave me a bunch of advice. It’s a conversation I will somehow remember forever.

Can you share with one piece of advice that he gave you?

He told me that making music is like making love. Like, damn! It’s just funny. He also just told me that a lot of people can make music and have the funk, but you have the opportunity to share it and that doesn’t come often. And that just made me want to really get better at everything, you know? We talked about playing live and about how I was touring. I talked him about it was for me crossing the border and stuff and how it’s just torture that everyone kind of has to go through. It was cool. We talked for like an hour and a half.

What was it like crossing over the border, since your parents came from Mexico?

Well, we know to smoke all the weed before [* cracks up laughing*] They always give people on a tour bus a hard time, especially because we were all Mexican. It was cool, we just would wake up at four in the morning at the border, and then everyone gets out their passport out, they ask you questions, it takes awhile, but we never got held up for really long or anything. But, man, in Mexico it’s so crazy with all my extended family cousins, aunts, uncles that I haven’t even met yet, they all know about me and I got to meet some family I’d never met before. And when I go tour, I see them and it’s just super cool because in my family everyone’s really proud and really happy and it’s cool. They all like the music and I have some Spanish music, so they appreciate it.

Have your parents always been supportive of your career choice?

Now? Yeah. But before? No, hell no. They were against this shit — like they should! I mean, when your kid tells you they want to be a singer. It’s like bro, what the fuck? Go fucking do something else. My mom wanted me to be a priest! She would tell everybody ‘He’s going to be a priest’. Like, ‘girl….’ I mean, ‘Mom’. I don’t call my mom ‘girl’.

When did she accept the fact you weren’t going to be a priest?

Recently! I remember I was in high school and my friends were like, bro, you need to go to school. You could still make music, just go to school, so I ended up going for like, a couple weeks. I went to school, just literally because my parents and everyone was like, dude, you got go. I was making beats at school and I’d go home and make beats and then I would go to class and listen to my beats. It was pretty dumb. I was still working at McDonald’s, too.

So you left school and you started putting your music on SoundCloud, right?

Yeah, I put up a bunch of songs on SoundCloud. After I put up a song called ‘Brackets’ [styled as “{}[]”], I really started noticing change. People were listening. I’d get a good 5,000-10,000 plays on SoundCloud. Then my big break came on Spotify. I was working at this guitar shop at the time, probably a year after I started putting shit on SoundCloud. It had been like a year of making music. I was out of college, just kind of going with the flow. My friend said, you gotta upload your music to Spotify, everyone’s using Spotify now. And I’m like, nah, we didn’t have 10 bucks a month to put towards that, you know what I mean? So he’s like, you know, I’ll put it up for you. I’ll send you money, it’s like 30 bucks, annually. I still have the screenshot of the cash app from 2017. I uploaded it and then the next day he FaceTimed me while I was at work and told me it was uploaded on a playlist. Like, that’s crazy. So then, I did it again.

Do you think Spotify is still a good way for people to be discovered or is TikTok better?

For me, I really don’t care. Tik Tok is really funny. I mean, I don’t know. Do whatever it takes to get your music out. You gotta do what you got to do. I’ve been there, trust me.

Listen to ‘Stayback’ remixed by Bootsy Collins, below