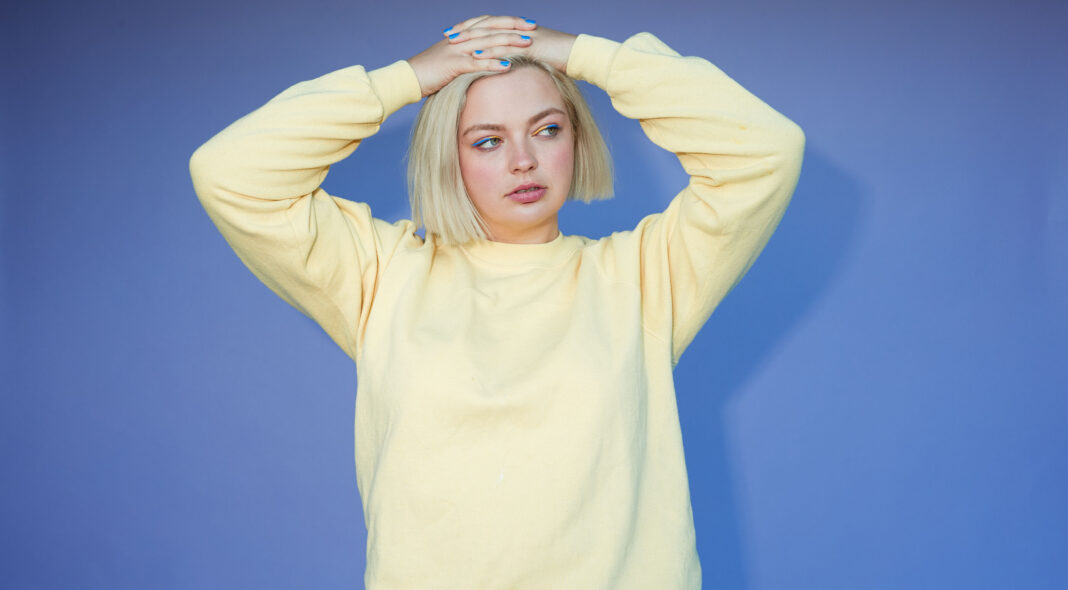 For any aspiring alt-pop artist worth their salt, comparisons to Lorde are probably inevitable at some point. For Navvy – real name Phoebe Lee Jasper – that fate seems utterly inescapable, and not just because she shares a hometown with the ‘Melodrama’-star. No, it’s her ability to dissect difficult emotions with deft lyricism, and turn romantic traumas into triumphant anthems, be that sweeping power ballads like ‘Scared To Be Happy’, with its “Damn, I’m strong” refrain, or the sparkling, Starsmith-produced synth-pop of ‘Pieces’.

With the release of her third EP – ‘The Final Pieces’ – imminent, we rang the Auckland-based singer-songwriter to talk Taylor Swift, pop prejudices, and the importance of using your platform for good.

On January 14, you took to Facebook to proclaim 2020 “the year of the live show.” Talk about jinxing things…

I did! You’re right! I forgot I said that. I was supposed to play my first ever festival in May, which was Dot To Dot in the UK, which would have been really cool. But I’m trying to just take this time to reset and figure out who I want to be in this industry, what I want to say, and what I want to represent, rather than just sit around and complain about it.

Your background was originally in classical music. What prompted the pivot to pop?

Yeah, I studied classical music, so I thought pop music was a big waste of time. And then I realised that I was being stupid and that actually the smartest music is the stuff that thousands if not millions of people can relate to. It’s a huge feat. And once I realised that I was like, ‘Oh maybe I want to do pop music.’ And here I am. I’ve actually got a Bachelor of Music, majoring in Pop, so I’m very qualified for the job. (Laughs)

Were there any particular artists who converted you to pop?

I have always loved Taylor Swift. She was the only pop artist that I thought deserved my time when I was 11, which just makes me laugh now. But I think that maybe with her it was the storytelling aspect of her music. And I was a huge fan of Glee… But I think Taylor Swift really changed my perspective on different types of music. Her change from country to pop really said a lot to me, not least the fact that that was even possible.

It sounds like you were quite confident in your opinions from a young age?

Well I started out very shy as a young child and then I started doing musical theatre and that changed really quickly because you can’t be shy in theatre. I got the word “gregarious” a lot on my report cards so I learned what that word meant very young. (Laughs) I think I’m just very enthusiastic and passionate. I’m an extroverted introvert, so I get very energised by being by myself but the only way I can really use that energy is by seeing friends or even strangers. People are my favourite thing in the world.

And I’m a big believer in social justice. When people call me a social justice warrior as an insult I’m like, ‘Yeah I believe in what I believe in and I’m going to speak up about it.’ I’m very vocal and my parents say I have been since I was very little. I believe in things very strongly, and I don’t do things by halves.

Do you take part in protests?

Yeah. There have been a few Black Lives Matter marches [in Auckland] which I was involved with. The first one was huge but the second one was a lot smaller, which was really disappointing. I think a lot of people felt like they’d done their part by going to the first one, and then fallen back asleep by not really being worried about it anymore. Like, ‘I made a sign, my work is done.’ And that was very frustrating.

I try to be as vocal as I can be on social media because I remember when I first posted about Black Lives Matter someone messaged me and was like, ‘Thank you for using your platform.’ And I was like, I don’t have a platform – I have, like, 3000 followers. And then I realised that if I had 3000 people in a room all looking at me, I would be very careful about what I said and I would want to use that time to say things that are important. So I’ve tried to be as involved as I can be without taking up all the space, because I also want to amplify the people that actually have experienced prejudice and know what they’re talking about.

Do you see that activism bleeding into your songwriting in the future?

Actually, I used to write a lot of protest songs. The first song I wrote was called ‘Love Is Love’. I’m a straight, CIS woman but stuff like that is really important to me. And that was when New Zealand passed the act to allow same sex marriage so I wrote about equality and sexuality. And I wrote a song when I was at uni about police brutality.

There’s a real emotional openness to your lyrics. Is that reflective of your personality?

Yes, 100%. I’m the most open book ever. People ask me a lot how I have the confidence to write in such detail, but I think that’s my job. And if I don’t want to share my experiences then I probably shouldn’t be an artist, because the only thing I can bring to this huge noise of music that’s released every day, is my specific experience.

For me, songs are almost diary entries. I like the idea of being able to listen to my first EP in 50 years and being like, ‘Woah, that’s what happened back then.’ But even in everyday life I’m an open book. Like, if someone in the supermarket said, ‘Hey, what’s your life like?’ I’d be like, ‘I was broken up with two years ago and he cheated on me, and I’ll tell you the whole story.’

Your latest single, ‘Pieces’, has been billed as “the latest chapter in a story that spans twelve months in which Navvy became a whole new person”. How so?

Well I’ve got another EP coming out in August, and that will be the third of three, and I see these EPs as representing my 2019. So the first one was ‘The Breakup EP’, because I was broken up with at the very end of 2018. And through writing about that I realised that actually I wasn’t that mad about it. Like, even though it wasn’t the best of circumstances, we had so many great times together I couldn’t throw them all away just because of one night where something happened. So then I released the ‘No Hard Feelings’ EP which was all about that, and then this next EP is the final chapter in the trilogy, and is about moving on.

I think that’s the Taylor Swift fan in me coming out, where I always want there to be some kind of theme that ties everything together. I don’t release EPs flippantly: they really are like mini albums for me. And I like that these three make sense together and you can listen from the start of the first one to the end of the third one as one 14-track album.

The first time we heard ‘Pieces’ we assumed you were Swedish.

Are you a fan of Scandipop?

Absolutely. For sure. I had a great session the other night with Martin Sjølie who did a lot of the Sigrid stuff, and I was just fangirling the whole time. But that sound is so specific – like, sad songs wrapped in a happy melody – and I’m stoked you thought that of me. I strive for that kind-of Robyn sound, so that’s a giant compliment.

Are there plans for an album after this new EP?

I think about it a lot, but I don’t know if I’m ready yet for an album. I’m a huge fan of album artists like Taylor Swift and the Beach Boys and Sufjan Stevens, so I think that writing an album is a really big commitment and I don’t think it should be taken lightly. Like, if I’m gonna do an album I want it to be very deliberate. So I think I’m going to keep doing EPs for a little while yet.

Mainly, I’m all about collaboration now. When I first started writing songs I thought collaboration was a cop out. My favourite Taylor Swift album, ‘Speak Now’, she wrote entirely on her own, and so I thought you had to do that to be a good artist. And then I realised that Michael Jackson didn’t write ‘Thriller’, and that there are different ways to be a good artist, and that sometimes, perhaps, two or three brains are better than one. I just love collaborating, and the fact that one morning a song doesn’t exist and by the afternoon we’ve created magic out of thin air. It drives me insane. I just can’t believe that that even exists.