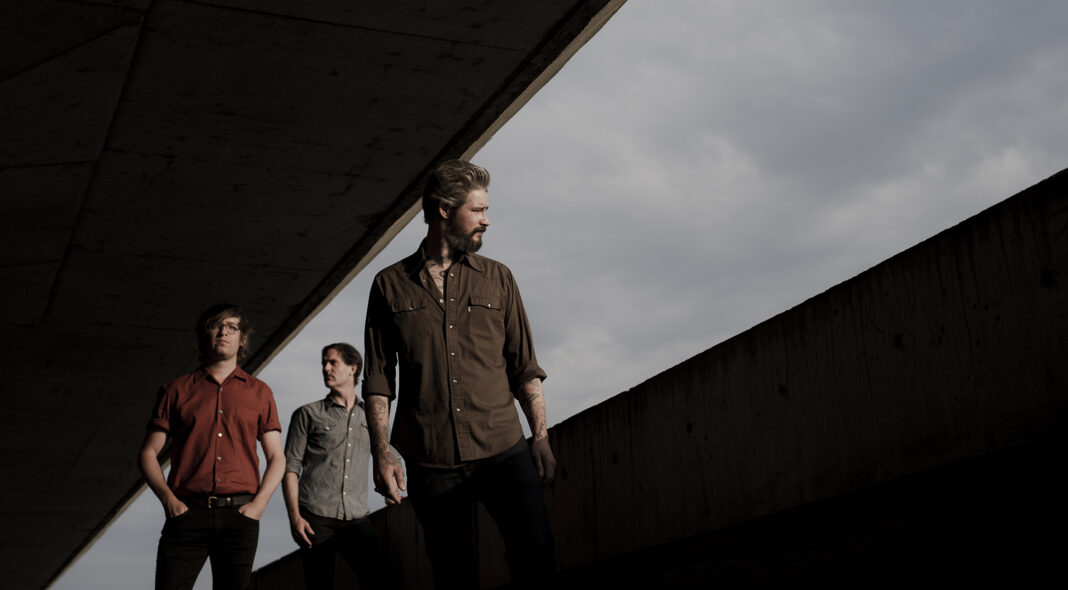 Arguably the only thing more punishing than METZ’s synapse-frazzling live act is the average length of tour the Toronto-based post-hardcore trio regularly undertake. But with their fourth studio album, ‘Atlas Vending’, now out in the world and the entire live industry on hold indefinitely due to COVID, what does it mean for a band who are arguably still at their most potent on stage?

Here, frontman Alex Edkins discusses the current state of Canada’s live music scene, explains why he subscribes to the idea of music as salvation, and reveals how contemporary anxieties and a desire to dial back the distortion and make “a more patient record” shaped the apocalyptic atmosphere of ‘Atlas Vending’.

How have you coped with this period of confinement?

I mean, it depends on the day for me, I think. I love reading, I love sitting with my record collection. But what I’ve learned is how much I was depending on live music in my life. I’m realising how much of my mental health and even my physical health was connected to going to shows and playing shows, and how my social life was basically almost 100% based on the music community here and around the world.

I think what really hurts is the not knowing; the big question mark hanging over you every single day. That being said, there is arts funding and support here in Canada to a certain extent, so it hasn’t been as bad as in some other countries. But it is still a pretty heavy shock to the system and a lot of people are either going out of business or looking for another way to make a living.

It must be a real wrench knowing you’re not going to be touring the new album any time soon?

Yeah, it is heartbreaking I’ve gotta say. We’re so proud of [the album] and we want it to be out in the world. And for it to connect with people and maybe serve as some kind of medicine during this time, you know? But [releasing it now] it certainly feels like you’re dropping a leaf into a river and it’s floating away from you and you’re not going to be able to bring it to people. At least not yet. It is a feeling that we’re struggling with, I think.

But you will be live streaming a show from the Toronto Opera House on October 17. Tell us about the set-up.

Well I have to say, I was a little bit sceptical of the whole idea at first. I’m a true believer in the power of live music and I don’t think that feeling and connection can be replicated, especially not on the internet. And so I was pushing off the suggestion for a long time, but now I’ve finally been convinced to do it and I’m excited.

The set-up is in an empty room but we’re gonna try to shoot it as intimately as possible so it feels like you’re almost on the stage with us. It certainly won’t be like our [usual live] show but I hope it’s something beautiful that hopefully can get our new record across.

You’ve been quoted as saying the goal for ‘Atlas Vending’ was to make a more patient, honest record. But honesty has always been your M.O. right?

For sure. If you can’t be honest with yourself or with your fans then you’ve got nothing to begin with. But as far as patience, we’ve tried to make a more mature record with more space – more ambience – within the context of punk rock, or of aggressive, physical music. It’s about finding a sweet spot where you can have both and I think the production of this album also plays into that, where it’s not quite as super-saturated with distortion. It creates space between each instrument and the guitar tones are cleaner and it makes for an experience that’s easier on the ears but still punches.

Does that idea of patience apply to how you’d like the album to be consumed?

I would love that. I think nowadays the way people consume music is so interesting and so different from what I’m used to. But I really hope that people listen to it front to back. It is absolutely sequenced as a journey and I hear a lyrical narrative throughout.

You mentioned earlier that you hope this album will be a tonic for listeners. Do you think ‘Atlas Vending’ is especially comforting, or is it more about music as a comfort in general?

In my life, music is central to my happiness so I think I meant it in that way. But also I think a lot of the lyrical content [on ‘Atlas Vending’] – and even musical tone – seems to be really fitting to this an anxiety-riddled, stressful time. It is an unprecedented thing that we’re all learning how to deal with right now and, oddly enough, when writing music I’m often in that head space. So I think more than ever, people might be ready to share that headspace with me on this one. (Laughs)

Your last album, ‘Strange Peace’, would have been written around 2016-ish, which was an insanely stressful period in history. Against the odds, the period we’re living through now feels even worse. What were the specific sources of anxiety on ‘Atlas Vending’?

So ‘Strange Peace’ was very much based around the political world and Trump – this failure of a leader – taking power. There was this feeling that things were getting bad and I could only see it getting worse. And then ‘Atlas Vending’ is very much about living in that world and trying to escape it by looking back.

It’s very much a nostalgic record in my mind. I’m pulling from my past, trying to take stock of certain things in my life that – for some reason or another – are still hanging with me and creating some sort of uncalm. Realising that I’m unable to go back and fix things that I’m not pleased with, things that I did. I think that finality of life is hitting me.

Tell me about that heightened awareness of your own mortality. Do you feel like the elder statesmen of hardcore now?

Honestly, no. (Laughs) I feel no different than I did when I was 20. And I still look up to so many musicians and writers and novelists and film makers and I see them as the elder statesmen. I will always see myself as the new kid on the block learning how to do this thing that I love.

And as a band, we’re just feeling this freedom – maybe for the first time – to do whatever we feel like doing. Just knowing that we can do that, and make something beautiful and compelling if we put our hearts in it. I think this record is proof that we’re only just starting to hit our stride as far as hitting an interesting spot musically where we’re pulling from our love of punk and our background in hardcore and post-punk as well as our love of all different styles of music.

There’s definitely an apocalyptic feel to the album closer ‘A Boat To Drown In’, with that brilliantly sprawling, Krautrock-inspired outro.

Yeah, I think of that as being like a weird Bruce Springsteen song. It’s the closest thing I’ve ever written to, “Let’s jump in your car and escape this world that we’re in.” And that outro is literally the image of the person escaping and driving away from this dark, confusing world that ‘Atlas Vending’ the album has created. And I love that.

As a final impression it’s really powerful. What would you like listeners to take away from the album?

I hope that they find an escape. I hope that they find something ugly enough to smile about in this album. I hope they find joy in this and that it takes them out of their daily life, even just for a second. That’s like with live music too – that’s the whole point for me. That’s why I miss it so much. You are not thinking about the mundane or the incredibly stressful and scary stuff that we’re reading about everyday, you’re lost in music. And that’s what I hope that this album can provide.

The Linda Lindas – ‘Growing Up’ review: viral punk newcomers are here to make adolescence (and beyond) a brighter place

Amyl and the Sniffers: “Humans are all just weirdos”

Chubby and the Gang – ‘The Mutt’s Nuts’ review: a teeth-rattling tour de force with a few left turns