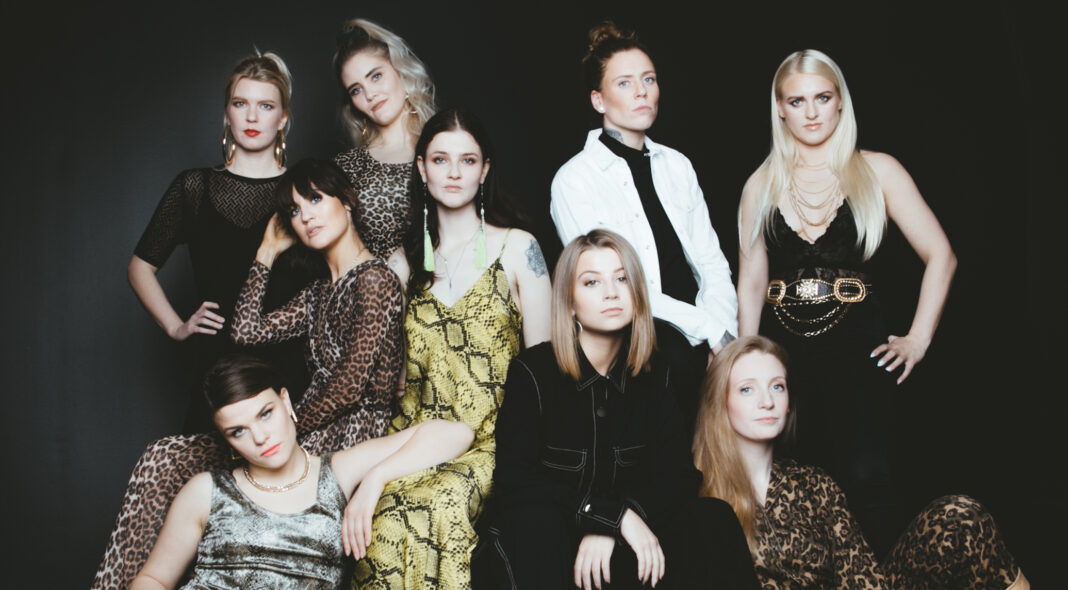 “Dry pussy feminist bitch?” Salka Valsdottir is trying to recall the most offensive comment her band has ever received online. “There are so many bad ones,” the rapper and producer smirks unruffled, speaking over Zoom from the Berlin studio in which she works. In the seven years since their formation, Daughters of Reykjavik – FKA Reykjavíkurdætur – have become depressingly accustomed to verbal abuse. It’s heartening, then, to hear them reclaiming these very slurs on new track ‘No Comment’, and not least because the song forms part of ‘Soft Spot’, their new record and the band’s strongest body of work to date.

Released in May, this self-produced second album represents a giant leap forward for the all-female hip-hop group, eclipsing 2018’s debut ‘Shrimpcocktail’, both in terms of ambition and execution. Now a tight, nine-piece outfit – rather than the nebulous, 20-something-strong collective that first found international notoriety at Iceland Airwaves festival in 2015 – their beats are sicker and bars are slicker, and despite clearly aiming at a larger audience they’re making no discernible concessions in regards to their famously frank subject matter. One moment they’re skewering their more materialistic instincts (‘Fool’s Gold’) or flipping misogynistic hip-hop tropes (the Eminem-bating ‘A Song To Kill Boys To’), and the next they’re exploring female solidarity via a sweet, Spice Girls-inspired bop called ‘DTR’.

We sat down for a lockdown video chat with Salka and band mate Steiney Skuladottir, and talked trolls, empowerment and achieving world domination, one baby at a time.

So it must be a bit of an anti-climax releasing an album during lockdown?

Salka: “(Exhales slowly) Yes. (Laughs) We did have a lot of great reactions and reviews online, so it did feed our egos a little bit, but not as much as it would usually. Which is probably a pretty good thing – sometimes you get a little bit crazy when you’re releasing something. What I think is sad is that we’re not going to have this momentum to tour with this album. But I don’t know, maybe it was better for this album anyway, because it’s a pretty soft album in many ways; an album that was intended to be streamed more than it was necessarily to be performed live. So now we’re going to have to make a huge party album and release it and tour with that.”

How has reducing your numbers to nine impacted the creative process?

Steiney: “This record was very different from the others because Salka said she wanted to produce the album – which we loved. Before, we’ve always had random beats from random producers, but Salka wanted to make an album that takes you on a journey, from the start to the end.”

Salka: “Also, writing was a way more integrated process than in previous projects, where we’ve written in pairs and then we’ve met and hustled the verses together. But this record we wrote mostly in the summer camp when we were all together, bouncing verses back and forth. And as a result I think it became way more fluent and integrated and personal, and that everyone was able to very much channel what they were really good at.

Steiney: “I think we could have a Ted Talk or something about how to work in a group. We’re so good at it.”

Salka: “All of us have to work in other jobs as well. So you have to be pretty dedicated to prioritise something that doesn’t pay your bills. And for the past two years this has been a very, very time consuming project. So some of the [former members] wanted to focus on something else, or had children and didn’t feel like doing both with their other work.”

Speaking of which, I was really impressed to see Sura performing while heavily pregnant in the video for ‘Thirsty Hoes’.

Salka: “Yeah! There’s always one pregnant person. Always. We’re nine and four of us have children. Including the members that are currently working in the band and the members that have been in the band, how many babies have there been born this year? Six?”

Steiney: “Yeah I think so.”

Salka: “There are, like, six new Daughters of Reykjavik in 2020”

Steiney: “We are naturally taking over the world by reproducing.”

You look back on your band history in the video for your latest single, ‘DTR’, right?

Steiney: “Yeah, It’s old videos from our phones from the past five years, when we started touring abroad.”

Salka: “We also decided to include every member that’s ever been in the band. It’s so crazy to see how many members have fluctuated through this little system.

Steiney: Basically, every single girl you will see on the screen has been in the band. I think it’s 23 people.”

The concept for the video fits so well with song, which is basically a love letter to each other. What prompted you to write it?

Steiney: “We’ve often had the question, ‘Who do you look to for inspiration, and who do you want to be like?’ And it kept coming up that we were like, ‘I think, just each other.’ I never feel as powerful as I do onstage with this group of girls. I feel like I can do anything – I can fuck up or I can do something amazing – and they’re always going to love me no matter what and celebrate whatever I do. It’s such a big difference from the rest of this male-dominated world. It’s such a relief.”

Salka: “The dynamic of the group makes you feel so powerful. When we were writing the record at the summer camp a year and a half ago, I think this was one of the last songs we wrote. We were reminiscing and thinking about how we could make something that would be for us, and to confirm the feelings we have for each other and for this group. I don’t think there are a lot of songs in Iceland that are specifically made for or about female friendship, and the confirmation and admiration women have for each other. I was just imagining 13 year old girls drinking for the first time and singing this song at karaoke, crying.”

Steiney: “‘You’re the one who always reminds me of the strength I have inside.’ That’s the chorus. And it’s just so on point of what this group does, I think, for every single one of us.”

And you’ve had to put on a united front because you’ve faced a lot of resistance back home. Do you think that criticism is essentially fuelled by misogyny?

Salka: A lot of it has been pure misogyny. And when you get really used to really, really sexist comments and someone tries to approach you with an opinion that is actually more like constructive criticism, I have caught myself just being too defensive to even be able to listen.

Steiney: Especially because at the beginning it wouldn’t matter what we would put out we would always get these hateful comments from the media here in Iceland. And we got famous very quickly in Iceland. Basically in one night.

Salka: Also, when we started we were amateurs. We were having fun and we were trying something out that we weren’t necessarily comfortable with or confident in. I think women especially get scrutinised for being amateur. It’s almost completely unacceptable. To have this group of this many women that all sucked but were still having all this fun, I think that inspired as many people as it infuriated. But there were a lot of shitty, blatantly sexist comments. It was a really crazy mirror on Icelandic society as well, which is recognised internationally for being progressive.

You’re scheduled to play Iceland Airwaves in November. What can we expect from the show?

Salka: That’ll be you, Steiney! You’re going to fucking do it (Laughs) But you can expect energy. A lot of it. Too much, some might say. Like, a lot of interactivity with the audience, a lot of chaotic choreography. Somebody once called us shitty Pussycat Dolls. (Laughs)

Steiney: That’s what you’re gonna get. (Laughs) With, I guess, more danger.